New Utrecht (Dutch: Nieuw Utrecht) was a town in western Long Island, New York encompassing all or part of the present-day Bath Beach, Bay Ridge, Bensonhurst, Borough Park, Dyker Heights and Fort Hamilton neighborhoods of Brooklyn, New York City. New Utrecht was established in 1652 by Dutch settlers in the Dutch colony of New Netherland, the last of the original six towns to be founded in Kings County. New Utrecht ceased to exist in 1894 when it was annexed by the City of Brooklyn, and became part of the City of Greater New York when Brooklyn joined as a borough in 1898.

In 1643, Anthony Janszoon van Salee, a half-Dutch, half-Moroccan son of a pirate, and a resident of New Amsterdam, obtained from the director-general of New Netherland a patent on a tract of farmland of more than 200 acres on western Long Island. It ran along the shore of the Bay and stood opposite Staten Island. Most of the land remained wild until, in 1652, Cornelius van Werckhoven, a surveyor born in Utrecht and a principal investor in the Dutch West India Company, took it over. Upon his death in 1655, Jacques Cortelyou, guardian for Werckhoven's children, received permission to sell lots of the land to create a town. Twenty lots were laid out. Cortelyou named the settlement Nieuw Utrecht after Werckhoven's hometown. 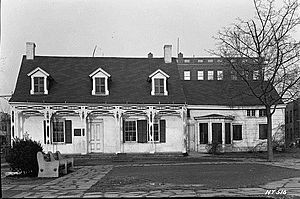 Nicasius de Sille, an attorney from Arnhem in the Netherlands, was one of the first to purchase a lot and build a house using locally available stone and red roof tiles imported from Holland. He moved to New Utrecht from his former residence in New Amsterdam at near the current intersection of Broad Street and Exchange Place. Nicasius de Sille was employed as an advisor to Petrus Stuyvesant and as a "schout fiscal", a combination of sheriff and district attorney. In 1660, de Sille's List of the Inhabitants of New Amsterdam was completed at the behest of Stuyvesant. The names and addresses on the list correspond to the houses drawn on the Castello Plan.

Once a palisade wall was erected, more residents came. In 1657, New Utrecht was granted status as a village and in 1661 Governor Peter Stuyvesant provided New Utrecht its own charter. New Netherland later came under British rule in 1664 as the colony of New York.

Initially, the community in New Utrecht went to Flatbush for Dutch Reformed religious services. In 1677, New Utrecht Reformed Church was chartered. In 1856, yellow fever spread from Staten Island to the inhabitants of Bay Ridge and Fort Hamilton. The cemetery contains a monument, erected in 1910 to honor Dr. James E. DuBois and his assistant Dr. John L. Crane, who died fighting the outbreak. The church received landmark status in 1966; the parish house and the cemetery received landmark status in 1998. Both the church and the cemetery are listed in the National Register of Historic Places.

In 1683, when Kings County was established within the Province of New York, New Utrecht was one of its six original towns, and came to encompass the villages of New Utrecht, Bath, Fort Hamilton and Bay Ridge. Town records were kept in the Dutch language until 1763.

During the American Revolution, the British made New Utrecht their base of operations for the Battle of Long Island. The old Cortelyou mansion served as General Howe's headquarters when he effected his landing on Long Island in August 1776. It was to the Nicasius di Sille house that the British brought the mortally wounded American General Nathaniel Woodhull. (The house was demolished in 1850.) The bluff on which Fort Hamilton was afterward built was occupied by the houses of Denyse Denyse, Abraham Bennett and Simon Cortelyou. In the bombardment from the ships, on August 26, 1776, the Bennett and Denyse dwellings were struck by shots from the English guns. From 1776 to the end of the British occupation, sympathizers with the Patriot cause were forced to make nightly trips across The Narrows in fishing boats to Staten Island and New Jersey.

Fort Lafayette was in the New York City borough of Brooklyn. The fort was built upon a natural island known as Hendrick's Reef.

During the War of 1812, construction was begun on a fort on an island offshore the southern tip of what is now Bay Ridge. The fort was originally named Fort Diamond but was renamed in 1825 to honor the Marquis de La Fayette

A literary club called the "Winter Society" founded the Free Library of the Town of New Utrecht in 1894.

New Utrecht was annexed by the City of Brooklyn on July 1, 1894, which became part of the consolidated City of New York on January 1, 1898. 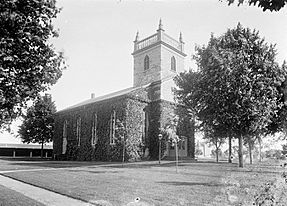 The area that encompassed the town center of New Utrecht is located in what is now Bensonhurst, Brooklyn. Eighty-fourth Street between Sixteenth and Eighteenth Avenues approximates the main thoroughfare of the town. The rest of the town's lands are today the neighborhoods of Borough Park, which has a large Hasidic Jewish population, and Bay Ridge. Bay Ridge was formerly known as Yellow Hook; the name was changed due to the multiple outbreaks of yellow fever that struck the New York area. The Bensons were one of the original Dutch settlers in New Utrecht. Some of the names of the other original families in New Utrecht are di Sille, Van Pelt, Cropsey and Nostrand. Cropsey Avenue and Nostrand Avenue in Brooklyn are named for the latter two.

What is called the Van Pelt Manor House was built in stages. The first section, of stone, was built by Jan Van Cleef (Cleve) around 1675 and later sold to Nicholas de Meyer, who sold it to Teunis Van Pelt. But an agreement with de Meyer allowed Van Cleef to live in the dwelling from 1691 until his death c. 1699. Around 1686, the house was enlarged and had a second floor added. Van Pelt's land was never established nor granted the status of "Manor".

In the obituary of his wife, reporter Edwin F. De Nyse was described as being from the "well-known New Utrecht family".

All content from Kiddle encyclopedia articles (including the article images and facts) can be freely used under Attribution-ShareAlike license, unless stated otherwise. Cite this article:
New Utrecht, Brooklyn Facts for Kids. Kiddle Encyclopedia.