She became the first Spanish gymnast in history to have competed in two Olympic finals, Atlanta and Sydney, and she is the only rhythmic gymnast to make the finals at four consecutive Olympic Games: Atlanta 1996, Sydney 2000, Athens 2004 and Beijing 2008

She also won the gold medal in the XVth Mediterranean Games Almería 2005 and she has been awarded many other national and international recognitions; among others, the gold medal in the Royal Order of Sports Merit in 2009, which is a Spanish civil Order of Merit intended to recognise yearly activities in the fields of sport and physical education.

In June 2001, the Fédération Internationale de Gymnastique announced that Almudena's "body-apparatus relationship" with the ball was approved by the Rhythmic Gymnastics Technical Committee. As the code describes the Cid Tostado element:

After a career lasting 21 years, she retired from rhythmic gymnastics on 23 August 2008. Currently, she is working as a sports commentator for rhythmic gymnastics competitions. Since 2014, she has also been writing Olympia, a children’s collection of stories in which she talks about her sporting life. 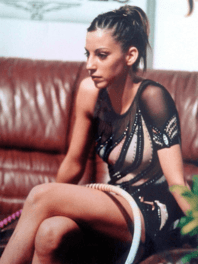 She started practising rhythmic gymnastics at the age of 7. She first went to Arabatxo club and then to Beti Aurrera club in Vitoria, in which other important gymnasts such as Tania Lamarca and Estíbaliz Martínez were trained. Her coaches there were Aurora Fernández del Valle and Iratxe Aurrekoetxea. One of Almudena’s first sports references, as she named them because she doesn't like to call them idols, was the Russian gymnast Oxana Kostina.

In May 1994, at the age of 13, she took part in the first international competition, in which she received three medals (one gold medal and two bronze medals). In November of the same year, she was asked by Emilia Boneva to start being part of the Spanish national individual team in Madrid, where she trained an average of 8 hours a day in the gym Gimnasio Moscardó.

At the 1995 Spanish Individual Championships, Almudena took the lead at a national level for the first time. In June 1995 she got the 12th position at the Final European Cup in Telford (England).

Since she started her sporting career, she has been awarded many recognitions, apart from the ones obtained at the Olympic Games.

Due to her good marks at the European Championship in Zaragoza, she was selected in order to represent Spain at the 2000 Sydney Olympics. Again she got the ninth position.

In her home town, Vitoria, she met her former trainer Iratxe, who motivated Almudena’s sporting life. They both moved to Barcelona and started working again together.

In 2004, the Spanish Gymnastics Federation decided that Almudena Cid and Jennifer Colino had to compete against each other in order to choose who would represent Spain at the 2004 Athens Olympics. The competition was at a very high level - nearly at Olympic level - causing mental and physical weariness and increasing the risk of injury before the Olympic Games. After obtaining the best marks, Almudena went to the 2004 Athens Olympics. 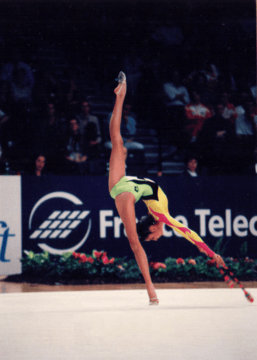 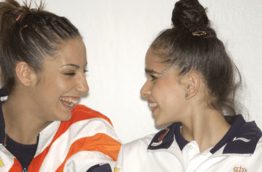 Almudena Cid and Jennifer Colino in a championship in Granada (2002)

In these Games she reached her third olympic final, something that no other rhythmic gymnastic had gotten until then. In the final, that took place on 29 August, she got the eighth position, along with the Olympic diploma. And she earned a trophy of Rio of Janeiro

Once again, Almudena was selected to represent Spain at 2008 Beijing Olympics, her fourth and last Olympic Games. 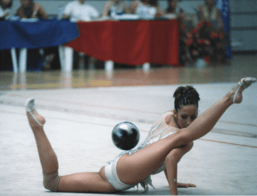 On 23 August 2008, she put an end to her sporting career. It coincided with the very last day of the Olympics finals in Beijing, in which she got the eighth position, along with the Olympic diploma. Her last exercise was with ribbon, accompanied by an adaptation of “Nessun dorma”, which is an aria by Giacomo Puccini. As a final gesture as a gymnast, she drew the shape of a heart on the mat and she kissed it.

Some years later, Almudena explained in an interview about her retirement and legacy in the field of rhythmic gymnastics:

“It was hard to decide when to retire, but I chose the moment that I wanted [...]. I’ve been trying for 8 years to avoid the idea that I was already too old to practise this sport. At the age of 28, I managed to show the world that I could be on top [...]. If it’s a sport in which judges evaluates also your facial expressions and how you use the apparatus, because people tend to think that rhythmic gymnastics only have to do with flexibility, but the apparatus is also very important. It’s an art and it is something that comes along with maturity [...]. I didn’t really get what it was about, and I therefore wondered: why do rhythmic gymnasts retire so soon? Because it is the society that retires you from it. I fought against all that.”

In 2007, Christian Gálvez met Cid in Pasapalabra, they dated for three years and were married on 7 August 2010 in Torrelodones, Madrid, by the mayor of Móstoles.

All content from Kiddle encyclopedia articles (including the article images and facts) can be freely used under Attribution-ShareAlike license, unless stated otherwise. Cite this article:
Almudena Cid Facts for Kids. Kiddle Encyclopedia.