Alonzo Edward Gee (born May 29, 1987) is an American professional basketball player. Born and raised in Riviera Beach, Florida, Gee attended the University of Alabama, where he played for the Alabama Crimson Tide men's basketball team for four seasons.

Gee attended William T. Dwyer High School in Palm Beach Gardens, Florida where he led them to Class 5A state titles in 2004 and 2005. As a junior in 2003–04, he averaged 15 points and seven rebounds per game as he earned All-State Tournament team and honorable mention All-State honors. He was also awarded the Most Valuable Player of the 2004 Adidas Showcase national tournament.

On November 16, 2004, he signed a National Letter of Intent to play college basketball for the University of Alabama.

As a senior in 2004–05, he averaged 21.3 points and 6.8 rebounds per game as was named the Class 5A State Tournament Most Valuable Player and the South Florida Sun-Sentinel Player of the Year. He also earned all-state first team honors.

Considered a four-star recruit by Rivals.com, Gee was listed as the No. 10 shooting guard and the No. 33 player in the nation in 2005.

In his freshman season at Alabama, Gee was named to the All-SEC Freshman team after averaging 8.6 points and 3.4 rebounds in 31 games.

In his sophomore season, he was named the Most Valuable Player of the Paradise Jam Tournament after scoring 12 points against Middle Tennessee, 21 points against Iowa and 13 points against Xavier while shooting 54.5 percent from the field in three games as the Tide won the tournament championship. In 32 games (all starts), he averaged 12.6 points and 5.3 rebounds per game. He also scored a then career high 26 points against Coppin State University.

In his junior season, he scored his 1,000th career point against Tennessee on January 29, 2008. He earned All-Tournament team honors at the Findlay Toyota Las Vegas Classic. He was also named to the All-SEC Preseason second team by the league's coaches. In 33 games (all starts), he averaged 14.5 points and 5.2 rebounds per game.

In his senior season, he was named to the All-SEC second team after averaging 15.0 points and 7.2 rebounds in 32 games.

Gee finished his basketball career at Alabama by being one of 41 players to score 1000 points in the career, as well as 127 assists, 120 steals and 35 blocked shots. 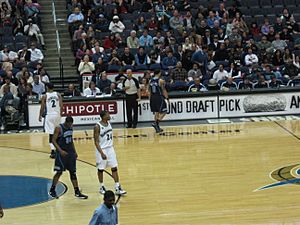 Gee (right) of the Washington Wizards walks next to C. J. Miles of the Utah Jazz during a game in March 2010

After going undrafted in the 2009 NBA draft, Gee joined the San Antonio Spurs for the 2009 NBA Summer League. On September 27, 2009, he signed with the Minnesota Timberwolves. However, he was later waived by the Timberwolves on October 6, 2009. On November 5, 2009, he was selected with the sixth overall pick in the 2009 NBA D-League draft by the Austin Toros. In 36 games (35 starts) for the Toros, he averaged 21.0 points and 6.6 rebounds per game.

On November 22, 2010, Gee signed with the Washington Wizards, returning to the franchise for a second stint. On December 20, 2010, he was waived by the Wizards after just 11 games.

On December 28, 2010, Gee signed with the Cleveland Cavaliers.

On August 28, 2011, he signed with Asseco Prokom Gdynia of Poland for the duration of the NBA lockout. In November 2011, he parted ways with Asseco Gdynia and returned to the United States citing personal reasons. In December 2011, following the conclusion of the lockout, he re-joined the Cavaliers.

On September 17, 2014, Gee was traded, along with Scotty Hopson, to the Sacramento Kings in exchange for Jason Terry and two future second-round draft picks. On September 25, 2014, he was waived by the Kings.

On February 19, 2015, Gee was traded, along with Arron Afflalo, to the Portland Trail Blazers in exchange for Will Barton, Víctor Claver, Thomas Robinson and a lottery-protected 2016 first-round pick.

On July 16, 2015, Gee signed with the New Orleans Pelicans. He appeared in 73 games for the Pelicans in 2015–16 before suffering a complete rupture of the right proximal rectus femoris on March 28 against the New York Knicks. The injury subsequently ruled him out for the rest of the season.

On November 16, 2016, Gee signed with the Denver Nuggets, returning to the franchise for a second stint. On January 6, 2017, he was waived by the Nuggets. Two days later, he signed a 10-day contract with the Nuggets.

On December 16, 2017, Gee was acquired by the Sioux Falls Skyforce of the NBA G League.

On April 13, 2018, Caciques de Humacao was reported to have signed Gee.

In June 2021, Alonzo Gee was drafted by Bivouac with the eighth overall pick of the 2021 BIG3 SuperDraft.

On September 23, 2021, Gee signed with the Taichung Suns for the T1 League. On January 8, 2022, Taichung Wagor Suns indicated that Gee went back to the United States for taking care of his grandmother.

Gee is the son of Darlene Gee, and has two older siblings, Lorenzo and Angela.

All content from Kiddle encyclopedia articles (including the article images and facts) can be freely used under Attribution-ShareAlike license, unless stated otherwise. Cite this article:
Alonzo Gee Facts for Kids. Kiddle Encyclopedia.