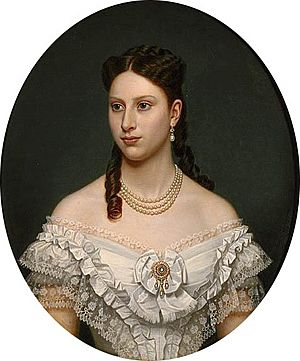 She became an orphan when her mother died in 1817. Then, she was adopted by the widow of Benjamin Sandel. Benjamin Sandel is thought to have been her real father.

Amalia liked to draw and wanted to become an artist. When the artist Qvarnström saw her drawings, he got her a permission to study art at the Swedish Academy of Arts in 1849. They thought she was very promising and had great talent. In 1850, she became the first woman who got a scholarship by the Academy to study art in Paris.

In 1856, she was elected to become a member in to the Swedish Academy of Arts. She showed people her paintings in the exhibitions in Paris in 1867, Philadelphia in 1876, and in Chicago in 1893.

All content from Kiddle encyclopedia articles (including the article images and facts) can be freely used under Attribution-ShareAlike license, unless stated otherwise. Cite this article:
Amalia Lindegren Facts for Kids. Kiddle Encyclopedia.