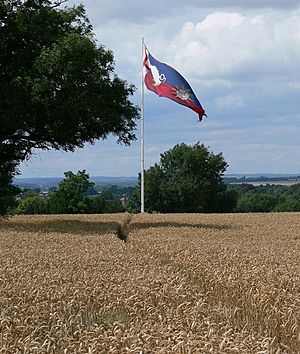 Ambion Hill is a hill in west Leicestershire, England, south of the town of Market Bosworth and lying south of the Sutton Cheney to Shenton road and north of Dadlington and of Fenn Lanes Roman road. The Ashby Canal passes to the south of the hill.

The hill is the site of the deserted medieval village of Anebein.

Ambion Hill was long considered to be the site of the Battle of Bosworth Field and is where the Bosworth Battlefield Heritage Centre is situated. The chronicler Raphael Holinshed wrote in 1577 that Richard III "pitched his field on a hill called Anne Beame, refreshed his soldiers and took his rest". This was taken by the C18th antiquary William Hutton to mean that Ambion Hill was the site of the battle. Hutton's book The Battle of Bosworth Field, published in 1788, was very influential in causing the hill to be accepted as the site of the battle.

A cairn built in 1813 marks the well from which according to tradition Richard III is said to have drunk prior to the battle. The cortège carrying Richard III's remains visited the hill during the procession before their interment in Leicester Cathedral in 2015. 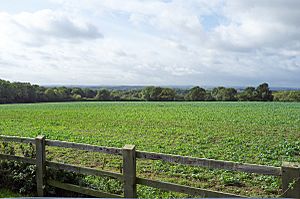 All content from Kiddle encyclopedia articles (including the article images and facts) can be freely used under Attribution-ShareAlike license, unless stated otherwise. Cite this article:
Ambion Hill Facts for Kids. Kiddle Encyclopedia.