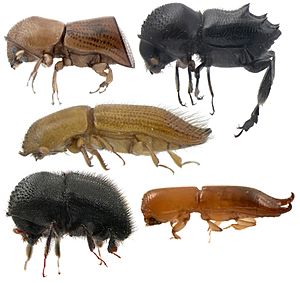 Xyleborini beetles - the most diverse group of ambrosia beetles

Ambrosia beetles are beetles of the weevil subfamilies Scolytinae and Platypodinae (Coleoptera, Curculionidae. They live in symbiosis with ambrosia fungi and bacteria. During their evolution, most weevils became more or less dependant on fungi.

The beetles excavate tunnels in dead or stressed trees in which they cultivate fungal gardens, their sole source of nutrition. The majority of ambrosia beetles colonize sapwood and/or heartwood of recently dead trees, but some attack stressed trees that are still alive, and a few species attack healthy trees.

The vast majority of ambrosia beetles colonize dead trees, and have minor or no economic effect. A few species are able to attack live and healthy trees, and those can reach epidemic proportions in non-native, invaded regions.

Until recently ambrosia beetles have been placed in independent families, however, they are in fact some of the most highly obtained weevils. There are about 3,000 known beetle species employing the ambrosia strategy.

All content from Kiddle encyclopedia articles (including the article images and facts) can be freely used under Attribution-ShareAlike license, unless stated otherwise. Cite this article:
Ambrosia beetle Facts for Kids. Kiddle Encyclopedia.