Marriott's Great America parks were unusual at the time because they were among the few parks with two carousels within the park. Each park had a carousel called the Columbia Carousel at the front of the park in addition to the Ameri-Go-Rounds.

It's a Deluxe Menagerie model 3-Row Carousel. It has 43 horses, with 12 elaborately carved outside row standing horses and 31 jumping horses. There are five menagerie figures, a lion, a tiger a deer, a giraffe, and a rare mule. Many of the jumpers were carved by Daniel Muller.

In 2003 the carousel was disassembled after the park closed for the winter. The ride was replaced with a HUSS Frisbee ride named Revolution in 2004. One reason for the ride's removal was that the ride was closed often due to low staffing and mechanical problems.

Santa Clara's Ameri-Go-Round was Philadelphia Toboggan Company's 45th carousel, built in 1918. It was built for the Cincinnati Zoo, sold by the zoo to Great America in 1974 and debuted there when the park opened in 1976. It was taken out of service in 1995 to make way for the Drop Zone Stunt Tower attraction. In 2000, it was announced that Linda and Tom Allen had arranged to donate it to Woodland Park Zoo in Seattle Washington. After a pavilion was constructed for it, it debuted there in 2006. 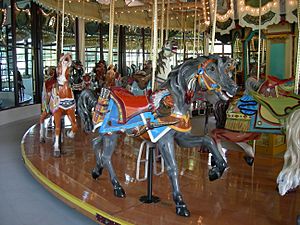 Carousel at the Woodland Park Zoo in Seattle.

All content from Kiddle encyclopedia articles (including the article images and facts) can be freely used under Attribution-ShareAlike license, unless stated otherwise. Cite this article:
Ameri-Go-Round Facts for Kids. Kiddle Encyclopedia.