California's Great America (formerly known as Marriott's Great America and Paramount's Great America) is a 112-acre (45 ha) amusement park located in Santa Clara, California. Owned and operated by Cedar Fair, it originally opened in 1976 as one of two parks built by the Marriott Corporation. California's Great America features over 40 rides and attractions, and one of its most notable is Gold Striker, which has been featured as a top-ranked wooden roller coaster in Amusement Today's annual Golden Ticket Awards publication. Other notable rides include RailBlazer, a single-rail coaster from Rocky Mountain Construction, and Flight Deck, an inverted coaster from Bolliger & Mabillard. The park appeared in Beverly Hills Cop III and Getting Even with Dad, two films that were released in 1994.

Marriott's Great America, built by hotel and restaurant operator Marriott Corporation, opened to the public on March 20, 1976. Less than two months later on May 29, the company opened a second Marriott's Great America – later known as Six Flags Great America – north of Chicago in Gurnee, Illinois. A third park was initially planned for the Baltimore–Washington metropolitan area, but the idea was later abandoned after several failed attempts to sway local opposition. 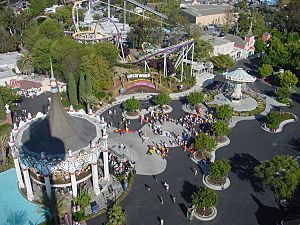 View of California's Great America from above

The park, though profitable, was still an earnings disappointment for Marriott, leading the company in 1983 to explore options to sell. An interested party, Caz Development Co., appraised the land value at US$800,000 to $1 million per acre. Marriott also involved the city of Santa Clara in negotiations, which was already leasing 55 acres (22 ha) of parking space for the amusement park. Fearing homebuilding on the land by Caz Development would lower home values of existing homeowners, the city council approved a $101 million purchasing agreement on January 31, 1984, by a 4–3 vote that also had to be approved by city residents. The citywide vote passed, approving the sale by a margin of 3 to 1. Caz Development then sued the city and Marriott in the Superior Court of Santa Clara County to block the transaction. The court nullified the sale, forcing the city to attempt to salvage the deal through negotiations with the other parties. Unable to broker a timely agreement, the city council voted 6–1 to scuttle the sale on February 5, 1985, though the city was still interested in owning the park. After Marriott refunded a $20 million down payment back to the city, negotiations were restarted. All parties were able to agree on a compromise, which was signed in marathon sessions taking place in early June 1985. The city acquired the park for $93.5 million from Marriott, which retained 20 acres (8.1 ha) from the sale for development. Caz Development settled and was allowed to build a hotel and office near the park, which the city renamed Great America.

Kings Entertainment Company, who owned and operated other amusement parks, was hired in 1985 to manage Great America for the city. In 1989, the city decided to return the park to the private sector and sold it to Kings Entertainment. In the agreement, the city would earn 5% of all revenue that exceeds $56 million.

Three years later Paramount Communications (formerly Gulf+Western), the owners of Paramount Pictures, sought to join other entertainment companies as a theme park owner. The company acquired Kings Entertainment, who owned Great America, Kings Island, Kings Dominion, Carowinds and Canada's Wonderland, for $400 million and created Paramount Parks. Viacom, the parent of MTV Networks (including Nickelodeon), then bought Paramount in 1994, allowing Nickelodeon theming and merchandise into the park as well. During the Paramount era, attractions from the Action FX Theatre, Nickelodeon Splat City (later Nickelodeon Central), Drop Zone Stunt Tower, Invertigo, and many more modern thrill ride attractions were added in. Because the park is landlocked in the center of Silicon Valley, several rides including the classic train ride and the Sky Whirl, a Marriott's Great America signature attraction, were removed to make way for newer attractions.

In its last years as a Paramount Park, Great America was co-owned with several broadcasting stations in the Bay Area, including KPIX-TV and KBCW.

After Viacom and CBS Corporation split, Paramount Parks became part of CBS. The merger did not last long, as CBS announced plans to sell the theme park division.

On October 25, 2007, Cedar Fair renamed the park California's Great America. For the 2008 season, the park saw the addition of a Huss Rides top spin ride called FireFall, a new ice show in the "Great America Theatre" (formerly The Paramount Theatre), and the addition of the Halloween Haunt event to the park.

In the summer of 2009, Cedar Fair announced that all the Nickelodeon themed areas would be replaced with Peanuts themed areas. In 2010, the newly rethemed Planet Snoopy opened in the park.

On January 27, 2011, the park announced Invertigo would be removed and relocated to Dorney Park, another Cedar Fair property.

On September 19, 2011, Cedar Fair confirmed reports that California's Great America would be sold to JMA Ventures, LLC for $70 million in cash. The sale required approval by the City of Santa Clara, and its city council was scheduled to vote on the matter on December 6, 2011. Cedar Fair, which purchased the park in 2006, expected to use the cash proceeds from the sale to reduce its senior secured debt. However, on December 6, 2011, JMA Ventures cancelled its plans to purchase the amusement park. In the same announcement, Cedar Fair also verified that a long-term agreement was reached with the San Francisco 49ers regarding parking and construction of a new stadium adjacent to Great America.

In 2018, the park opened RailBlazer, the first single-rail coaster in the US west of Texas.

California's Great America did not open for the 2020 season in response to the COVID-19 pandemic in the United States, although it is expected to reopen for the 2021 season. 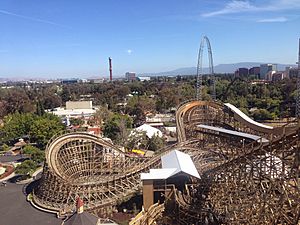 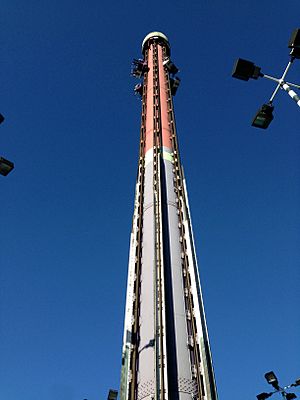 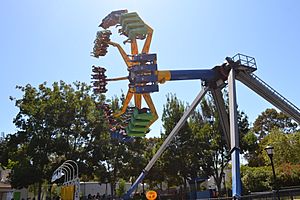 Past rides and attractions include:

Fast Lane, first introduced at a Cedar Fair park in July 2011, is a secondary queue system that offers shorter wait times on the park's most popular rides. FastLane is a system where in addition to a standard admission charge, visitors can purchase a wrist band. The band grants access to the Fast Lane queue. In theory, a limited number of wrist bands are available each day.

Halloween Haunt is a seasonal event at California's Great America. It had a "teaser" maze in 2007, but officially began in 2008 and is patterned after other Cedar Fair HAUNT such as Knott's

SCarowinds HAUNT XL The annual Haunt includes over 500 monsters placed in various haunted mazes and scare zones throughout the park.

For 2017, Halloween Haunt features eight haunted mazes, three scare zones, four shows, and five Skeleton Keys. It gives guests with the Fright Lane pass an extra rooms to go through in which are scattered throughout the park. These rooms are interactive. 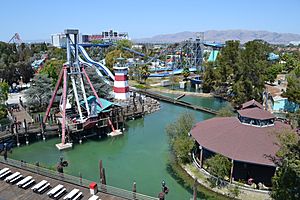 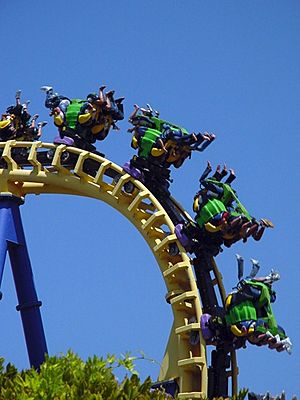 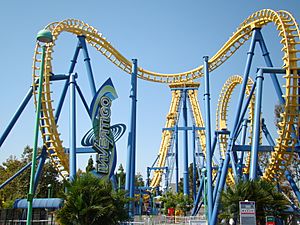 Though appearing under the name "Wonder World", Paramount's Great America was used for exterior scenes of the theme park in the 1994 film Beverly Hills Cop III (itself released by Paramount Pictures) after Knott's Berry Farm declined filming rights.

Writer Steven E. de Souza originally wrote the story as more "Die Hard in a theme park". He was told that each of the rides he had designed would cost about $10 million to build and the whole film would cost about $70 million. When box office results for The Distinguished Gentleman came in, Paramount ordered the budget to be cut to $55 million.

Some modifications were made to the Columbia Carousel and Vortex roller coaster. Most of the Sky Whirl/Triple Wheel stunts (renamed "The Spider" for the film) were filmed in a studio. To film the exterior scenes, the motors of the Triple Wheel were left unpowered; instead, to ensure the ride did not move too quickly, some cages were loaded with sandbags to unbalance the mechanism. In this scene, George Lucas has a small part as the man Axel cuts in front of to get on the ride, also known as 'disappointed man' (this can be seen in the credits). John Singleton and Martha Coolidge also made cameo appearances in the film.

Many rides that were seen in the movie including Triple Play/Sky Whirl have since been removed. Also, the carousel at the back of the park (the Ameri-Go-Round, not the Columbia Carousel) was altered. The Ameri-Go-Round carousel has since been removed and Drop Zone is now in its place. The tunnels that supposedly ran under the park are a myth as well. No tunnels run under the park, as many thought after this was released.

The Alien Attack ride featured in the Wonder World theme park was in fact the "Earthquake: The Big One attraction" from the Universal Studios Florida theme park in Orlando, Florida. The "aliens" featured in the ride are suited actors (and not animatronic as suggested in the film) that closely resembled the Cylons from the original Battlestar Galactica.

Other film and television

All content from Kiddle encyclopedia articles (including the article images and facts) can be freely used under Attribution-ShareAlike license, unless stated otherwise. Cite this article:
California's Great America Facts for Kids. Kiddle Encyclopedia.