Nighthawk is a steel flying roller coaster from Vekoma located at Carowinds amusement park. The roller coaster originally opened as Stealth at California's Great America on April 1, 2000. In 2003, Paramount decided to relocate the roller coaster to Carowinds. It reopened as Borg Assimilator – the first coaster in the world to be themed to Star Trek – on March 20, 2004. After Cedar Fair purchased Carowinds in 2006, Paramount themes were soon removed from the park, and the ride was renamed Nighthawk. It is one of only two Flying Dutchman models still in existence from Vekoma. 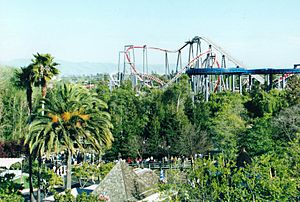 Nighthawk when it was known as Stealth at California's Great America.

On June 22, 1999, California's Great America announced Stealth as "the world's first true flying coaster." For Stealth to be installed, the lower flume of Logger's Run had to be altered and the Yankee Clipper had to be removed. The ride officially opened to the public on April 1, 2000. On August 21, 2003, it was announced Stealth would close on September 1 to make room for a new water park, Boomerang Bay. The station and several footers are still located in the water park today.

In 1984, Carowinds added Smurf Island, which was a children's play area located on the 1.3-acre (5,300 m2) island surrounded by the Carolina Sternwheeler. In the 1990s, Smurf Island was eventually closed and later demolished to make space for a new ride.

On August 21, 2003, Carowinds announced a new flying roller coaster that would be relocated from California's Great America. The ride's name was not announced at the time. On January 15, 2004, it was announced the new roller coaster would be named Borg Assimilator and would be the first Star Trek themed roller coaster. Regarding the design of the attraction, Dale Kaetzel, Vice President of marketing and Assistant General Manager, said:

Borg Assimilator gives our guests a unique opportunity – to experience the sensations of free flight without the traditional boundaries of a roller coaster. As you look out over the park, you get a virtually unobstructed view of the landscape and you are continually surprised at where the experience takes you.

Nighthawk subsequently replaced the Carolina Sternwheeler Riverboat, a paddle boat ride that took riders around the seven themed areas of the park. It officially opened to the public on March 20, 2004.

Cedar Fair Entertainment Company purchased Carowinds in 2006 and was offered to use the rights of all Paramount properties for ten years at a nominal fee. The Cedar Fair Entertainment Company declined and renamed all Paramount-branded roller coasters, including Borg Assimilator. In 2008, the park renamed several attractions including Borg Assimilator. It was renamed to Nighthawk and the Star Trek theming was removed, including the black sphere that was in the pond underneath the ride. In 2009, Nighthawk was painted with dark blue supports and yellow track. 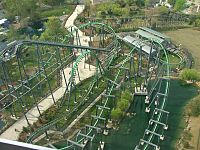 Nighthawk when it was known as Borg Assimilator.

The steel track is approximately 2,766 feet (843 m) in length and the height of the lift is approximately 115 feet (35 m). While at California's Great America, the track was painted red and white with steel gray supports. When the ride was relocated to Carowinds, the track was repainted black and green and the supports remained gray. After the name was changed in 2008, the ride was once again repainted with yellow track and blue supports.

Once riders are seated and restrained, the train tilts backwards into a 'lay-down' position and is dispatched. The train travels backwards out of the station, turns left and travels up the 115-foot (35 m) lift hill. Once the train reaches the top of the lift hill, it dips down into a twist (called a "Lie-to-Fly") that turns the trains upside down into a flying position where riders face the ground. After the twist, the train travels down the first drop, reaching speeds of 51 mph (82 km/h). Riders then go through an over banked Horseshoe Curve element. Following the Horseshoe, the train enters a "Fly-to-Lie" element that turns riders back to a lay-down position. After the banked turn, the ride enters the 66-foot (20 m) tall vertical loop, where riders experience 4.3 G's. The train then goes into another "Lie-to-Fly" element. Following the loop, riders go through another turn into the final "Fly-to-Lie" element before entering two consecutive corkscrews before making a right turn onto the brake run. 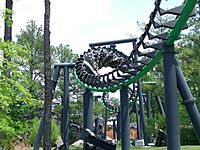 Nighthawk when it was known as Borg Assimilator in the double corkscrew. (Parts of the theming can be seen)

While the ride was located at Paramount's Great America, there was no theme for the ride. When it was relocated to Carowinds in 2004, it was built as the first Star Trek themed roller coaster in the world. It was renamed Borg Assimilator and the story was that "Borg crash-landed in the middle of Carowinds and their ship – a giant gray and black sphere – has come to rest near the park's new flying roller coaster." There was a gray and black sphere located in the pond underneath the ride that the Borg crashed in. In addition to other theming, a voice was played surrounding the ride saying Borg quotes. After Cedar Fair bought the park, all the Star Trek theming was removed and the name was changed for the 2008 season.

Nighthawk currently operates with two trains. Each train has six cars that have four seats in a single row for a total of 24 riders. Riders are restrained by an over the shoulder restraint and a lap bar. Riders can put on the over the shoulder restraint but a ride operator will push down the lap bar. While in the station, the trains will recline back to the laying down position.

All content from Kiddle encyclopedia articles (including the article images and facts) can be freely used under Attribution-ShareAlike license, unless stated otherwise. Cite this article:
Nighthawk (roller coaster) Facts for Kids. Kiddle Encyclopedia.