For the granite monument erected in Georgia, see Georgia Guidestones 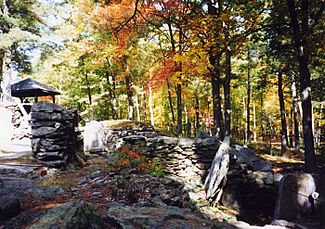 Some of the rocks at America's Stonehenge.

America's Stonehenge is an archaeological site consisting of a number of large rocks and stone structures scattered around roughly 30 acres (12 hectares) within the town of Salem, New Hampshire, in the United States. It is open to the public for a fee as part of a recreational area which includes snowshoe trails and an alpaca farm. It is a tourist attraction with particular appeal to adherents of New Age belief systems.

A number of hypotheses exist as to the origin and purpose of the structures. One viewpoint is a mixture of land-use practices of local farmers in the 18th and 19th centuries and construction of structures by owner William Goodwin, an insurance executive who purchased the area in 1937.

Some claim that the site has a pre-Columbian European origin, but this is regarded as pseudoarchaeological or the result of an early-20th century hoax. Archaeologist David Starbuck has said: "It is widely believed that Goodwin may have 'created' much of what is visible at the site today."

The site was first dubbed Mystery Hill by William Goodwin. This was the official name of the site until 1982, when it was renamed "America's Stonehenge", a term coined in a news article in the early 1960s. The rebranding was an effort to separate it from roadside oddity sites and to reinforce the idea that it is an ancient archaeological site. The area is named after Stonehenge in England, although there is no evidence of cultural or historical connection between the two.

The site first appears in print in the 1907 History of Salem, N.H.:

Jonathan Pattee's Cave. He had a house in these woods 70 years ago; took town paupers before the town farm was bought. This is a wild but beautiful spot, among rough boulders and soft pines, about which the most weird and fantastic tale might be woven. There are several caves still intact, which the owner used for storage purposes.

Many believe that Pattee built the site in the nineteenth century, and no unequivocal pre-Columbian European artifacts have been found there.

The site's history is muddled partly because of the activities of William Goodwin, who became convinced that the location was proof that Irish monks (the Culdees) had lived there long before the time of Christopher Columbus, and he sought to publicize the concept. The site has been altered by stone quarrying, and also by Goodwin and others who wanted to move the stones to what they considered to be their original locations; Goodwin might have been responsible for much of what can now be seen. Many of the stones have drill marks from the quarrying that took place on the site.

More fanciful origins have also been proposed, but artifacts found on the site led archaeologists to the conclusion that the stones were actually assembled for a variety of reasons by local farmers in the 18th and 19th centuries. For example, there is a so-called "sacrificial stone" which contains grooves that some say channeled blood, but it closely resembles "lye-leaching stones" found on many old farms that were used to extract lye from wood ashes, the first step in the manufacture of soap.

In 1982, David Stewart-Smith, director of restoration at Mystery Hill, conducted an excavation of a megalith found in a stone quarry to the north of the main site. His research team excavated the quarry site under the supervision of the New Hampshire state archaeologist and discovered hundreds of chips and flakes from the stone. They concluded that this was evidence of tool manufacture, consistent with American Indian lithic techniques, although no date could be ascertained. Archaeologist Curtis Runnels stated, "No Bronze Age artifacts have been found there. ... In fact, no one has found a single artifact of European origin from that period anywhere in the New World."

In 2019, the site was vandalized with power tools, with police saying the person may have been trying to re-enact a scene from a fictional work.

All content from Kiddle encyclopedia articles (including the article images and facts) can be freely used under Attribution-ShareAlike license, unless stated otherwise. Cite this article:
America's Stonehenge Facts for Kids. Kiddle Encyclopedia.