Kids Encyclopedia Facts
Not to be confused with American Beech.

American Beach is a historic beach community in northeastern Florida popular with American vacationers. It is located north of Jacksonville on Amelia Island in Nassau County. During the time of segregation and the Jim Crow era, African Americans were not allowed to swim at most beaches in Jacksonville, and several black-only areas were created. American Beach was the largest and most popular, and was a community established by Abraham Lincoln Lewis, Florida's first black millionaire and president of the Afro-American Life Insurance Company. It contains American Beach Historic District, a historic district which was listed on the National Register of Historic Places in 2002. 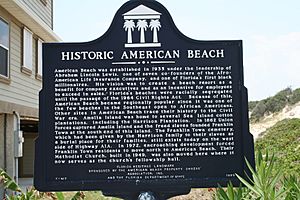 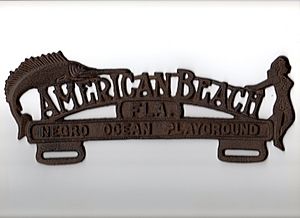 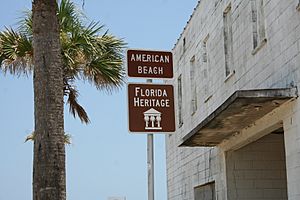 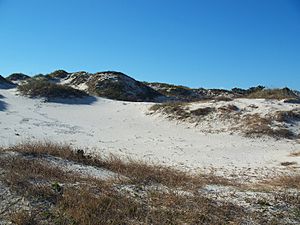 American Beach was founded in 1935 by Florida's first black millionaire, Abraham Lincoln Lewis, and his Afro-American Life Insurance Company. The plan was for his employees to have a place to vacation and own homes for their families by the shore. Throughout the 1930s, 1940s, and 1950s, summers at American Beach were busy with families, churches and children. It was a place where African Americans could enjoy "Recreation and Relaxation Without Humiliation". The beach included hotels, restaurants, and nightclubs as well as homes and other businesses.

A.L. Lewis' great-granddaughter MaVynee Betsch, known to locals as the Beach Lady, returned to American Beach in 1977 to fight for its preservation. For years, she planted trees along Lewis street, offered historical tours of the beach, and fought to raise public awareness of the beach and its struggle until her death September 2005. She wanted to make American Beach a monument to black Americans' determination to overcome the obstacles of the Jim Crow era. As of January 2001, American Beach is listed as a historic site by the National Register of Historic Places.

American Beach Historic District is a U.S. historic district in American Beach. It is roughly bounded by Gregg, Lewis, Leonard, Main and James Streets, and Ocean Boulevard, encompasses approximately 400 acres (1.6 km2), and contains 67 buildings and one structure. On January 28, 2002, it was added to the U.S. National Register of Historic Places.

All content from Kiddle encyclopedia articles (including the article images and facts) can be freely used under Attribution-ShareAlike license, unless stated otherwise. Cite this article:
American Beach, Florida Facts for Kids. Kiddle Encyclopedia.