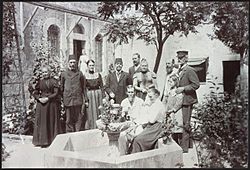 The American Colony in Jerusalem was a colony in Jerusalem. It was established by an American and Swedish Christian utopian group in 1881. During the British Mandate of Palestine, the colony was occupied by Jordan until the Six-Day War in 1967.

The cemetery of the colony is located in the National Garden of the Hebrew University of Jerusalem in Mount Scopus.

All content from Kiddle encyclopedia articles (including the article images and facts) can be freely used under Attribution-ShareAlike license, unless stated otherwise. Cite this article:
American Colony, Jerusalem Facts for Kids. Kiddle Encyclopedia.