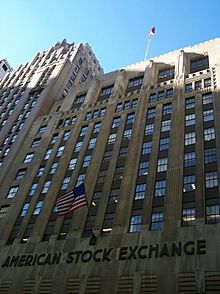 The American Stock Exchange (AMEX) is a stock exchange in New York City. It was created on Broad Street near Exchange Place, during colonial times. The stock exchange is currently owned by its own members.

All content from Kiddle encyclopedia articles (including the article images and facts) can be freely used under Attribution-ShareAlike license, unless stated otherwise. Cite this article:
American Stock Exchange Facts for Kids. Kiddle Encyclopedia.