The word kickboxing represents a sport of combat of striking which is practised on ring. In the years 1960, in the United States, the sharp interest for the karate and for the other martial arts (kempo, kung-fu, taekwondo, bando, etc.) and the desire of several mass media does developping the things. 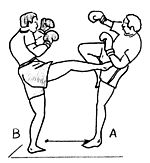 Various styles of martial practices developped with the various forms of contact. Many champions wanting to know the special end easy recognized qualities of their techniques, helped in causing their gradual change. Competitions were arranged in lot of different styles of combat; like Jhoon Rhee's United States National Karate Championship, the Ed Parker's Battle of Atlanta, and from the 1963 they opens on ring of Bando kickboxing (form come to have of the ancient Burmese boxing brought in from another country by the person with special skill Maung Gyi). Other important competitions like Mas Oyama's All Worth America Championship (Karate Kyokushinkai to the K.O.) has changed the traditional competitions of karate from yet arranged without contact.

Also, the Bruce Lee's (famous cinema actor, in the middle of the years 1970) and Jhoon Rhee's (Alan Steen's, Jeff Smith's and Gordon Franks's teacher) idea of fighting with protections and gloves, has opened a new way for all the persons who like "real combat". At the beginning, American kickboxing is rules of competition. Such rules allow the competitors of the various martial practices to compete in a certain kind of fighting (at the beginning that ones of the WKA - World Karate Association). If is so much the main opinion that is become one of the forms of sport of combat produced by the martial arts more practised in the world.

All content from Kiddle encyclopedia articles (including the article images and facts) can be freely used under Attribution-ShareAlike license, unless stated otherwise. Cite this article:
American kickboxing Facts for Kids. Kiddle Encyclopedia.