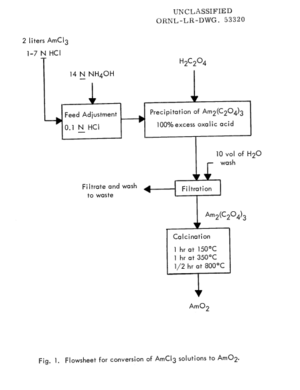 Flow chart to the synthesis of Americium dioxide.

Americium dioxide is a black compound of Americium. As a solid, AmO2 has the same structure as fluorite (CaF2).

Americium-Aluminium alloys are formed by the melting of americium dioxide with aluminium and a fluxing agent. These alloys can be used to produce atoms of elements having a higher atomic number than Uranium.

All content from Kiddle encyclopedia articles (including the article images and facts) can be freely used under Attribution-ShareAlike license, unless stated otherwise. Cite this article:
Americium dioxide Facts for Kids. Kiddle Encyclopedia.