Al-Hafiz was born in the city of Aleppo. 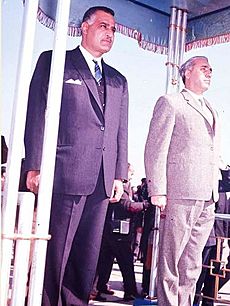 Hafiz (right) with Egyptian President Gamal Abdel Nasser on his arrival to Cairo for the Arab League summit, 1964

The 1963 Syrian coup d'état led by the Military Committee introduced al-Hafiz to public life. In the aftermath of the coup, the National Council of the Revolutionary Command (NCRC) became the country's supreme organ. The NCRC was dominated by the Syrian branch of the radical, pan-Arab Ba'ath Party. Al-Hafiz became President, instituted socialist reforms, and oriented his country towards the Eastern Bloc.

On 23 February 1966, al-Hafiz was overthrown by a radical Ba'athist faction headed by Chief of Staff Salah Jadid. A late warning telegram of the coup d'état was sent from Egyptian President Gamal Abdel Nasser to Nasim al-Safarjalani (The General Secretary of Presidential Council), on the early morning of the coup d'état. The coup sprung out of factional rivalry between Jadid's "regionalist" (qutri) camp of the Ba'ath Party, which promoted ambitions for a Greater Syria, and the more traditionally pan-Arab al-Hafiz faction, called the "nationalist" (qawmi) faction. Jadid's supporters were also seen as more radically left-wing. The coup was also supported and led by officers from Syria's religious minorities, especially the Alawites and the Druze, whereas al-Hafiz belonged to the majority Sunni population.

After being wounded in the three-hour shootout that preceded the coup, in which two of his children were seriously injured, al-Hafiz was jailed in Damascus's Mezzeh prison before being sent to Lebanon in June 1967. A year later, he was relocated to Baghdad. In 1971, the courts of Damascus sentenced him to death in absentia; however, Saddam Hussein "treated him and his fellow exile, Ba'ath founder Michel Aflaq, like royalty", and the sentence was not carried out. After the fall of Saddam in the Iraq War of 2003, al-Hafiz was quietly allowed to return to Syria. He died in Aleppo on December 17, 2009; reports of his age differ, but he was believed to be in his late 80s. He received a state-sponsored funeral.

All content from Kiddle encyclopedia articles (including the article images and facts) can be freely used under Attribution-ShareAlike license, unless stated otherwise. Cite this article:
Amin al-Hafiz Facts for Kids. Kiddle Encyclopedia.