Amy Ella Blanchard was born in Baltimore, Maryland, in 1854, the daughter of Daniel Harris Blanchard and Sarah Reynolds.

She was educated in public schools and then studied art in New York City and Philadelphia.

Amy Ella Blanchard was at first a teacher of art in the Woman's College in Baltimore, now Goucher College. She taught school while studying art. She then taught drawing and painting for two years in Plainfield, New Jersey.

Her first poem was published when she was 16 years old in a Salem newspaper. Three years later she published her first book, but it was not until 1893 that she obtained her first success with her stories. 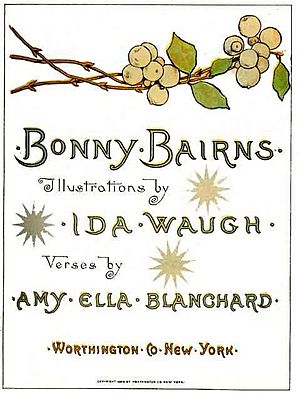 In 1888 she published her first book, and the first collaboration with Ida Waugh, Bonny Bairns, with the Worthington & Co. firm of New York. In this book the usual order was reversed, and the pictures were illustrated with verses. The combination was not only pleasant but pretty. The lithographs were beautifully executed and did full justice to the drawings, which were of a much higher quality than usually appeared in children's picture books. The verses that accompanied them made a pleasant jingle with just sense enough to make them attractive to the chubby critic.

Amy Ella Blanchard was a lifelong companion of her artist collaborator Ida Waugh (1846-1919). They met when Waugh was still living with her parents and Blanchard was hired as tutor of Waugh's younger brother, future painter Frederick Judd Waugh.

They lived together in Philadelphia and New York City, their homes a gathering place for authors.

In 1906 Blanchard moved to Washington, D.C. where she lived at 1080 31st Street, N.W. During this period she became a popular writer of girls' books.

Blanchard and Waugh had neighboring summer cottages at Bailey Island, Maine where they helped organize the construction of a chapel in 1916. Winters were spent in Redding Ridge, Connecticut.

From 1923 to 1925 Blanchard won for three successive years the first prize in a national contest promoted by the National League of American Pen Women, of which league she was a member, for the best story written by American women writers.

She died on July 4, 1926, at Bailey Island from apoplexy; she was found by her maid at the desk, a just complete poem forecasting her own death in front of her. She is buried in Woodlawn Cemetery, Woodlawn, Baltimore County, Maryland, at her own request.

She contributed a few titles to the Camp Fire Girls series including:

All content from Kiddle encyclopedia articles (including the article images and facts) can be freely used under Attribution-ShareAlike license, unless stated otherwise. Cite this article:
Amy Ella Blanchard Facts for Kids. Kiddle Encyclopedia.