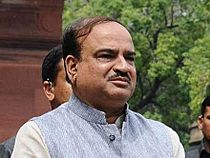 Ananth Kumar (22 July 1959 – 12 November 2018) was an Indian politician. He was a member of the Bharatiya Janata Party. From 1996 until his death, he had represented the Bengaluru South constituency in the Lok Sabha. He was born in Bengaluru, Mysore State (now Karnataka).

All content from Kiddle encyclopedia articles (including the article images and facts) can be freely used under Attribution-ShareAlike license, unless stated otherwise. Cite this article:
Ananth Kumar Facts for Kids. Kiddle Encyclopedia.