Kids Encyclopedia Facts
This page is about the island in New Zealand. For the island in Canada's Nunavut Territory, see Anchor Island (Nunavut).

Anchor Island (Māori: Pukenui) is an island in Dusky Sound in Fiordland. 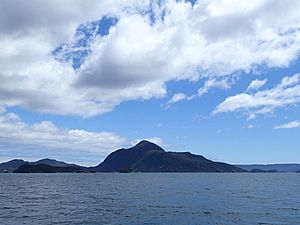 Anchor Island – from the East 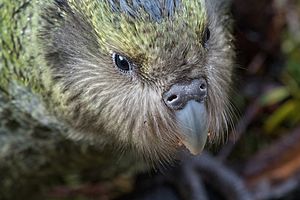 The New Zealand Ministry for Culture and Heritage gives a translation of "large hill" for Pukenui.

The island is situated southwest of the much larger Resolution Island in the inlet area of Dusky Sound and surrounded by many smaller islands and contains four small lakes, including Lake Kirirua, the largest lake on an island in Fiordland.

The island is part of the Fiordland National Park and since 2005 is one of few island sanctuaries that are home to the critically endangered kakapo (or night parrot).

Red deer and stoats had been eradicated between 2001 and 2005, and subsequently endangered endemic birds including tieke (saddleback), mohua (yellowhead), kakapo, and New Zealand rock wren have been relocated to the island. The island is one of only nine islands in the area that is completely free of introduced mammalian pests and is 2.5 km (1.6 mi) from the New Zealand mainland, which makes it relatively safe from repeat incursions by stoat and deer.

All content from Kiddle encyclopedia articles (including the article images and facts) can be freely used under Attribution-ShareAlike license, unless stated otherwise. Cite this article:
Anchor Island Facts for Kids. Kiddle Encyclopedia.