Resolution Island or Tau Moana (Māori) is the largest island in the Fiordland region of southwest New Zealand, covering a total of 208 km2 (80 sq mi). It is the country's seventh largest island, and the second largest uninhabited island. Resolution Island is separated from the mainland of the South Island by Dusky Sound and Breaksea Sound. The island is part of the Fiordland National Park. 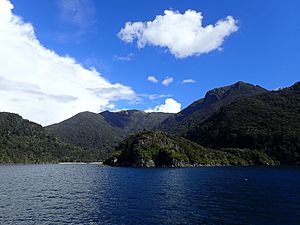 Resolution from the North - Near the Gilbert Islands

The island is named after Capt. James Cook's ship Resolution which landed here on Dusky Sound during Cook's Second Voyage in March 1773.

The island was chosen in 2004 to be one of New Zealand's offshore reserves, which are cleared of introduced species to protect native species. This follows a much earlier episode, in 1894, when the Department of Lands and Survey appointed Richard Henry as curator of the island, which was stocked with species such as kakapo and kiwi that were threatened by mustelids on the mainland. This early attempt at using the island for conservation management failed when stoats reached the island in 1900.

On 15 July 2009, Resolution island was at the epicenter of a magnitude 7.8 earthquake.

All content from Kiddle encyclopedia articles (including the article images and facts) can be freely used under Attribution-ShareAlike license, unless stated otherwise. Cite this article:
Resolution Island (New Zealand) Facts for Kids. Kiddle Encyclopedia.