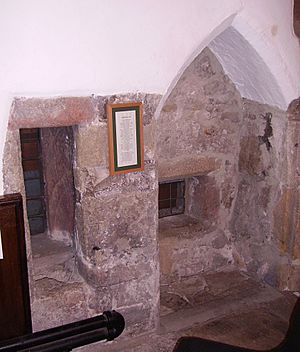 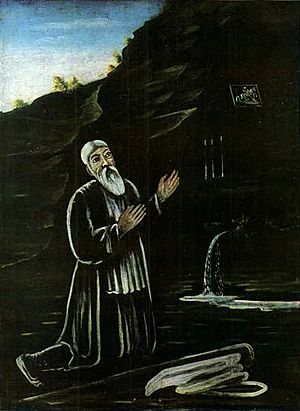 An anchorite (female: anchoress) from "one who has retired from the world", is someone who, for religious reasons, withdraws from secular society so as to be able to lead an intensely prayer-filled, ascetic life. Anchorites are often considered to be a type of religious hermit, unlike hermits, anchorites had to make a promise to God to stay in one place, which was a very small room, either attached to, or within the wall of, a local church.

The anchoritic life is one of the earliest forms of being a Christian monk. From the 12th to the 16th centuries, female anchorites consistently outnumbered their male equivalents, sometimes by as many as four to one (in the 13th century), dropping eventually to two to one (in the 15th century). The sex of a high number of anchorites, however, is not recorded for these periods.

All content from Kiddle encyclopedia articles (including the article images and facts) can be freely used under Attribution-ShareAlike license, unless stated otherwise. Cite this article:
Anchorite Facts for Kids. Kiddle Encyclopedia.