Ancient Echoes Interpretive Centre is a community-based museum and interpretive centre, founded in 1994, that educates, conserves, protects, and promotes the history, the peoples and the assets of the land forming the Eagle Creek Valley and Coal Mine Ravine located in Herschel, Saskatchewan, Canada.

The centre began in the fall of 1994, after the closure of the local elementary school, which the board of directors bought from the school division for a small sum.

Ancient Echoes Interpretive Centre is located northwest of Rosetown in the village of Herschel. It is a community-based project that serves the west central area of Saskatchewan for the educational and preservation purposes of the site and as a community centre. It sits atop the Coalmine ravine and overlooks several fossil beds and a First Nations ceremonial complex designated a Municipal Heritage Site by the province of Saskatchewan. Over the years, several professional archaeology and paleontology excavations have taken place at the centre.

Ancient Echoes is now under the umbrella of the R.M. of Mountain View #318. The centre has three key areas of focus: prehistoric era, aboriginal history, and the ecology of the area, which is native prairie. The area includes aboriginal historical sites including petroglyphs. They have archaeological dig-sites and paleontology excavation sites which includes many marine fossils like plesiosaurs and mosasaurs, including the only example of an Dolichorhynchops herschelensis in the world. There are guided hikes through the ravine area to see the different sites and exhibits that contain a natural history display, aboriginal artifacts and a permanent painting collection about the disappearance of the plains bison by Quebec artist, Jo Cooper.

Outside the centre is a life-size statue of a plains grizzly bear created by William Epp that once roamed the prairie before they disappeared in the early 20th century. The centre also pays tribute to the James Carnegie, 9th Earl of Southesk who came to this part of Saskatchewan, from Kinnaird, Scotland, in 1859 on a hunting expedition in search of large game, including the plains grizzly. His diary details his encounter with a bear in the Bad Hills near Herschel.

Ancient Echoes is a popular site for school tours throughout the year, offering custom-designed programs for students of all ages in the areas of Aboriginal history, ecology and archaeology. It also offers summer programs including traditional pottery making, drum making, ecology and paleontology hikes, full-moon hikes, educational and craft days for children. The centre provides programs for school groups and the general public. It accommodates all age levels, interest levels and group sizes. It offers special programs throughout the summer months and a few in the winter months. It a seasonal facility open Tuesdays–Sundays from May to the end of August, and then by request through the winter and spring.

In October 1994, what was then called The Herschel Interpretive Centre was officially established. It was staffed by a dedicated team of volunteers and funded by individual and corporate donations, as well as a small government grant. The centre's mandate is as follows: "Ancient Echoes is a community-based project which interprets, conserves, and promotes the history, the peoples and the assets of the land forming the Eagle Creek Valley and beyond the Coal Mine Ravine in Herschel, Saskatchewan."

Over the years, Ancient Echoes has received many generous donations from local artisans and large companies. These include the contribution of several taxidermy pieces from local taxidermist Lyle Waddington. While preparations were being made to open the centre in 1994, Waddington donated many native bird and mammal species found in the Herschel area. These included a full 900 kilogram buffalo mount, which is displayed at the centre to this day.

Around this same time, Rosetown resident and woodcarver Jack Klemmer visited Ancient Echoes for the first time. Since then, his carvings have been on display at the centre, and the proceeds from their sale have been donated to Ancient Echoes. Also in the late 1990s, the centre received a $5,000 donation from Enbridge Pipelines to purchase shipping carts for the centre's displays and to help pay for the initial print run of renowned Metis artist Jo Cooper's paintings, entitled “The Disappearance and Resurgence of the Buffalo”, which was displayed for the first time at Ancient Echoes Interpretive Centre, where it remains today as a permanent exhibit.

In the 1990s, the fossilized remains of three Dolichorhynchops herschelensis were discovered in the Coalmine Ravine. During this excavation paleontologists uncovered the remains of varying marine life: several shark species, numerous fish vertebrate fragments, and a mosasaur (large lizard-like marine animal). Since then, paleontologists have continued and expanded their exploration work in the Coalmine Ravine. New dinosaurs, marine reptiles, plants and other fossils are frequently found in the ravine. The Herschel area is now considered a hot spot for archaeology, paleontology, and native plants and animals. 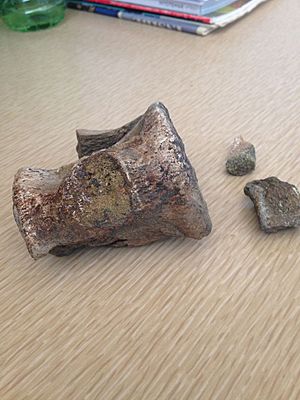 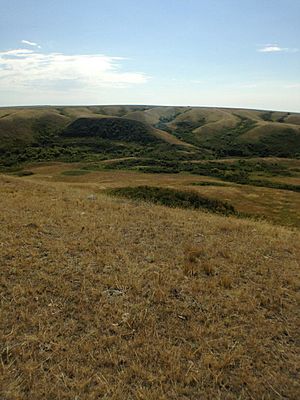 The Ancient Echoes interpretive Centre is home to the only specimens of Dolichorhynchops herschelensis ever discovered. It was discovered to be a new species by Tamaki Sato in 2005. The fossils were discovered in the Bearpaw Formation of Saskatchewan, a Late Cretaceous (late Campanian to Maastrichtian) rock formation. The fossil was found close to the town of Herschel, from which the species name is derived. The rock formation it was found in consists of sandstones, mudstones and shales laid down in the Western Interior Seaway, just before it began to revert to dry land.

The D. herschelensis skeleton was discovered was scattered around the dig site. The skull, lower jaw, ribs, pelvis and shoulder blades were all recovered, but the spine was incomplete, so the exact number of vertebrae the living animal would have had is unknown. All four limbs are missing, with the exception of nine small Phalanges (finger bones) and a small number of limb bones found close by, which may belong to the animal in question.

The fossil is believed to be that of an adult Dolichorhynchops herschelensis. It is also believed to have been substantially smaller than its close relative, D. osborni, as some juvenile specimens of D. osborni are larger than the adult specimen of D. herschelensis. Assuming that only a few vertebrae are missing from the skeleton, the animal is estimated to be about 2.5 to 3 metres in length. The snout is long and thin, with numerous tooth sockets. However, very few of the thin, sharp teeth remain.

Ancient Echoes Interpretive Centre offers both indoor and outdoor educational tours of its paleontology sites and exhibits which include dinosaur and fossil displays, geological specimens and a dinosaur dig site. The centre's prairie grasslands ecology exhibit and tour includes endangered prairie plants as well as traditional first nations medicine and food, animals in the wild, and taxidermy displays. The First Nations exhibit and tours includes the history of First Nations people in the Herschel area and tours of a traditional ceremonial complex which includes petroglyphs, a vision quest site, a turtle effigy, archaeological dig, tipi rings, buffalo jump, pemmican processing site, tool artifacts and pottery making displays. Artifacts related to James Carnegie, 9th Earl of Southesk's visit in 1959 round out the exhibits.

The centre also boasts an exhibit of art by renowned Metis artist Jo Cooper titled “The Disappearance and Resurgence of the Buffalo” which explores the history of the plains bison in the region. A life-sized sculpture by artist William Epp, of the now extinct plains grizzly bear shot close to where the centre now stands, by famed Scottish hunter James Carnegie, 9th Earl of Southesk on a hunting trip to the area in 1859, can be found on the grounds of the centre alongside a unique metal sculpture of a Dolichorhynchops herschelensis. 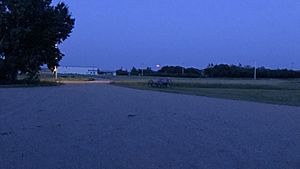 Full moon rising over Ancient Echoes Interpretive Centre in Herschel, Saskatchewan before the start of the Full Moon Hike

Ancient Echoes has added an art gallery space. The Prairie View Gallery contains numerous exhibits throughout the year celebrating new and established artists and photographers. Exhibits in this space are usually held at the centre for three months at a time.

"From Heartbreak to Healing" (2018) is an exhibit by Saskatchewan artist Jean A. Humphrey that explores her experience of her husband's Alzheimer's disease through sculptures and painting.

The Valley View Tea Room is found inside Ancient Echoes Interpretive Centre and is run by local volunteers. It offers coffee, tea, and other beverages, and features home-made baked goods including local favourites like Saskatoon berry pie. The centre's gift shop contains a variety of souvenirs for both children and adults related to the Ancient Echoes Interpretive Centre as well as the community of Herschel.

The tea room is open Wednesdays, Fridays, and Sundays from 2:30-4:30 P.M. CST during the summer and Fridays during the winter.

The Herschel Museum is located in the former St. Boniface Catholic Church that was built in 1926. The church closed in 1969 and the building was sold and donated to the Village of Herschel in 1988 when it was officially opened as the Herschel Museum.

Displays include a local original kitchen, living room, bedroom, and household artifacts. Souvenirs of the Herschel School are collected here, although the school photos are displayed in an album at Ancient Echoes. There is a large collection of local sports memorabilia, tools, and agricultural equipment here. The Rural Municipality of Mountain View No. 318 has collections of books, maps, and artifacts on display as well.

Access to the museum is granted only through Ancient Echoes Interpretive Centre. Educational programming and guided school tours focusing on history, nature/biology, First Nations culture, paleontology and archaeology are available. Local and Saskatoon-based school groups are common in the spring and summer.

All content from Kiddle encyclopedia articles (including the article images and facts) can be freely used under Attribution-ShareAlike license, unless stated otherwise. Cite this article:
Ancient Echoes Interpretive Centre Facts for Kids. Kiddle Encyclopedia.