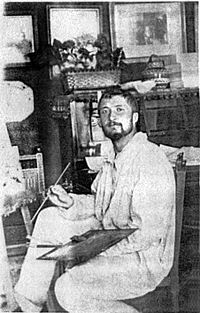 His father was the engraver, printer and publisher, Édouard Devambez [fr], founder of the Maison Devambez. From an early age, he decided to become an artist and worked with his father to learn engraving. Together, they established a studio in the Passage des Panoramas, where they designed stationery, menus and advertisements. He later studied at the École des Beaux-arts with Jean-Joseph Benjamin-Constant and took private lessons from Jules Lefebvre at the Académie Julian. He was awarded the Prix de Rome in 1890 for his depiction of the denial of Peter and spent several years at the Villa Médicis. In 1899 he was elected a member of the Société des Artistes Français, at whose annual Salon he exhibited. In 1929, he became a Professor at the École; a position he retained until 1937. That same year, he was elected to Seat#9 at the Académie des Beaux-Arts, which he held until his death. 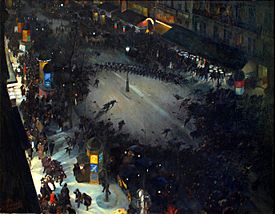 There are nine of his works in the Musée d'Orsay in Paris, including his most famous painting, La Charge. This dramatic street scene, painted c.1902, shows a violent confrontation between police and demonstrators on the Boulevard Montmartre, viewed from a high angle. This plunging perspective was one of Devambez’ artistic trademarks, as was the production of paintings on wood in small formats, works known as "les Tout-Petits". .

As an artist Devambez was attracted to scenes of modern life, and in 1910, being invited to provide decorative panels for the new French Embassy in Vienna, he chose the subject of modern inventions, painting the metro, an omnibus, airships and aeroplanes. Sadly these designs have not survived, but an oil painted the same year, now in the Musée d’Orsay, gives an idea of how they must have looked. Entitled Le seul oiseau qui vole au-dessus des nuages (The only bird that flies above the clouds), it employs another breathtaking downward perspective to show a biplane flying above a cloud-mass, with glimpses of the ground far below. In 1934 André Devambez was appointed official artist to the newly created French Air Ministry. 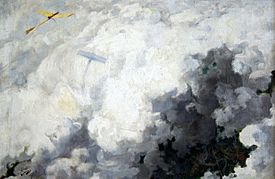 Growing up as he did in a printing shop, it was inevitable that André Devambez would also take up printmaking. He produced a considerable number of etchings, including an album of Douze Eaux-fortes, issued in an edition of 150 copies in 1915. The twelve etchings in this rare album are of First World War subjects, with the following titles: Le Froid; Les Trous d'obus; Le Bouclier; L'Incendie; Un Schraprell; La Pluie; L'Espionne; Les Otages; Gare la Marmite; Les Réserves; Le Charbon; Le Fou. Devambez was also a lithographer.

André Devambez also wrote and illustrated books. Auguste a Mauvais Caractère (Devambez, 1913) was a children's book, with André's own illustrations hand-coloured by the master of stencil technique, Jean Saudé; the original illustrations were exhibited the following year at the Palais de Glace. This was the first of a number of children's books, including Histoire de la petite Tata et du Gros Patapouf and Les Aventures du Capitaine Mille-Sabords, nos. 8 and 9 in a series of undated stories issued in concertina format "Chez l’auteur". These children's stories were probably intended for the amusement of his son, the archaeologist and curator of Greek and Roman antiquities at the Louvre, Pierre Devambez (1902–1980) and his daughter Valentine (1907-?).

A retrospective of his work was held at the Musée de Beauvais in 1988.

All content from Kiddle encyclopedia articles (including the article images and facts) can be freely used under Attribution-ShareAlike license, unless stated otherwise. Cite this article:
André Devambez Facts for Kids. Kiddle Encyclopedia.