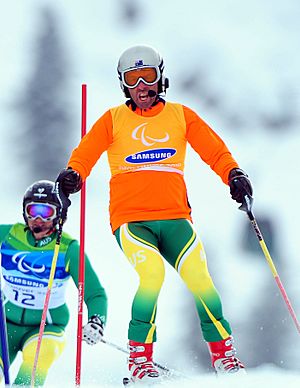 Andrew Bor (born 14 April 1963) is a skier and ski coach from Australia. He helps skiers who cannot see by telling them where to go on a mountain. He skied at the 2011 IPC Alpine Skiing World Championships with Melissa Perrine. They were the second skiers to finish the women's visually impaired downhill race, and the third skiers to finish in the Super-G race and the Super Combined race.

All content from Kiddle encyclopedia articles (including the article images and facts) can be freely used under Attribution-ShareAlike license, unless stated otherwise. Cite this article:
Andrew Bor Facts for Kids. Kiddle Encyclopedia.