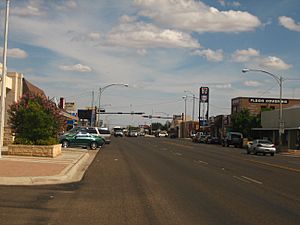 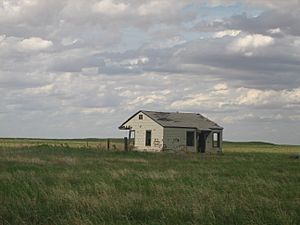 A rural scene on U.S. Route 385 north of Andrews

Andrews is a city in and the county seat of Andrews County in the State of Texas within the West Texas region. The population was 12,718 as of 2013.

Andrews was incorporated on February 2, 1937. Both the city and county were named for Richard Andrews, the first Texan soldier to die in the Texas Revolution.

Andrews Loop 1910 is a 13.1-mile-long (21.1 km), $12.5 million, city-maintained, ring road that through trucks are directed to follow. Although it is not a state highway, it is designated similar to a state highway loop, with a special blue shield. The number refers to the year Andrews County was organized, a name chosen after a citywide competition was held to name the new loop.

According to the Köppen Climate Classification system, Andrews has a semi-arid climate, abbreviated "BSk" on climate maps.

There were 3,478 households out of which 40.3% had children under the age of 18 living with them, 61.3% were married couples living together, 10.2% had a female householder with no husband present, and 25.3% were non-families. 23.7% of all households were made up of individuals and 11.1% had someone living alone who was 65 years of age or older. The average household size was 2.75 and the average family size was 3.26.

Andrews is a city built on oil and soil. After the first oil well was drilled (1929) by Deep Rock Oil Company on Missourian Charles E. Ogden's property Andrews County became one of the major oil producing counties in the State of Texas, having produced in excess of 1 billion barrels (160,000,000 m3) of oil. However, the cyclical nature of the oil business (as well as diminishing production on existing wells), has caused the community to look into new means of economic development, such as waste disposal, which in some areas has caused controversy.

Waste Control Specialists (WCS), owned by Harold Simmons and headquartered in Dallas, Texas, operates a 14,000 acres (57 km2) site in Andrews County on the border with New Mexico. The company was awarded a license to dispose of radioactive waste by the TCEQ in 2009. The permit allows for disposal of radioactive materials such as uranium, plutonium and thorium from commercial power plants, academic institutions and medical schools. The company finished construction on the project in 2011 and started disposing of waste in 2012. There are two radioactive waste landfills at the site. The 30-acre compact site is owned and regulated by the State of Texas for use by Texas, Vermont, and up to 36 other states. The 90-acre federal site is owned by the United States federal government and is used for Department of Energy and other federal waste. The company employs 130 people or about 1% of the total labor force in Andrews.

For years there has been a simmering dispute over which state these waste sites are lawfully a part of: Texas or New Mexico? The straight north-south border between the two states was originally defined as the 103rd meridian, but the 1859 survey that was supposed to mark that boundary mistakenly set the border between 2.29 and 3.77 miles too far west of that line, making the waste sites, along with the current towns of Farwell, Texline, and part of Glenrio, appear to be within the State of Texas. New Mexico's short border with Oklahoma, in contrast, was surveyed on the correct meridian. New Mexico's draft constitution in 1910 stated that the border is on the 103rd meridian as intended. The disputed strip, hundreds of miles long, includes parts of valuable oilfields of the Permian Basin. A bill was passed in the New Mexico Senate to fund and file a lawsuit in the U.S. Supreme Court to recover the strip from Texas, but the bill did not become law. Today, land in the strip is included in Texas land surveys and the waste sites for all purposes are taxed and governed by The State of Texas.

The city was set to be the location of the now defunct $400 million HT3R project.

In 1972, Andrews became the site of the first Kirby Company vacuum cleaner factory outside of the original location in Ohio. It is often referred to as "Kirby West" to signify the westward expansion of the country. The company employs about 200 people.

In 2011 the city opened Business Park South to provide more incentive options for attracting businesses. Energy Business Park was also opened by the city in 2014.

The city completed more than $3 million in airport renovations. Voters approved bonds to construct a new $13 million loop around town which opened in October 2013. A brand new $2 million fire station opened at the end of 2013. A new $60 million hospital is also planned to open in 2015.

The town began to sell alcohol for the first time on December 19, 2013.

The Andrews County Veterans Memorial is a memorial in Andrews which was created in 2006 as a tribute to those Andrews County residents who served in the United States' armed forces. Soldiers from every major conflict in which America has participated are honored.

The Andrews Bird Viewing Trail opened to the public in 2007. The park includes a .2 mile trail alongside ponds with an overlook deck, benches, and an observation binocular stand.

In effort to attract events to the community, the city funded and built ACE Arena (a multi-purpose arena) which opened in March 2007. A smaller outdoor arena was also constructed in 2012 adjacent to the indoor arena.

The city approved a $2 million water park to replace the former city pool in 2013.

The city started construction on a new museum in 2013 inside the first home built in Andrews. The house was relocated to property adjacent to the Andrews County Veterans Memorial.

All content from Kiddle encyclopedia articles (including the article images and facts) can be freely used under Attribution-ShareAlike license, unless stated otherwise. Cite this article:
Andrews, Texas Facts for Kids. Kiddle Encyclopedia.