Aneroid Lake is a large tarn located on Aneroid Mountain in the Eagle Cap Wilderness of northeastern Oregon. It is situated in between Roger Lake and Dollar Lake. It is not accessible by any kind of motor vehicle. However, there is a popular hiking trail that leads to the lake. There is a small group of private cabins near the south end and Pete's Point is clearly visible from the lake. It ties with Laverty Lake as the twenty-third highest lake in the Eagle Cap Wilderness at 7,500 ft (2,300 m).

Being surrounded by slopes that are typically covered in snow as early as October, Aneroid Lake has become a popular backcountry skiing destination. Guided tours are available, some tours utilize the cabins at the lake.

The area is known for unexpected avalanches, which at times have caused fatalities. One of the earliest avalanche caused fatalities on record that occurred at Aneroid Lake was on February 14, 1981, when an avalanche killed one skier near the lake. Through not a single avalanche-related death had occurred at lake since 1981, on March 7, 2009, a 50-year-old skier was killed near the lake. Roger T. Roepke, his 15-year-old son, and 48-year-old Don Woodhouse were part of a group who was skiing about one half mile above the Aneroid Lake cabins when a quarter-mile-long slab avalanche occurred, burying the three skiers. The avalanche began at about 1 p.m. and slid approximately 1,000 feet (300 m) before the run-out. It received a 3.5 danger scale rating by the American Avalanche Association. Don Woodhouse and the 15-year-old Roepke survived the event. However, after 30 minutes of CPR and other life saving measures, Roger Roepke was considered dead.

One half mile east of Aneroid Lake is Aneroid Lake Snotel #2, which is one of the two SNOTELs in the Eagle Cap mountains. It measures the depth of the snow, the amount of water content in the snow, general precipitation, and air temperature. It is operated by the Natural Resources Conservation Service and was installed in 1982. 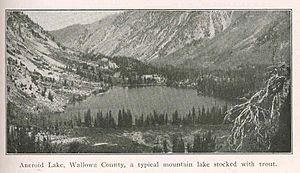 An early black and white image of Aneroid Lake

All content from Kiddle encyclopedia articles (including the article images and facts) can be freely used under Attribution-ShareAlike license, unless stated otherwise. Cite this article:
Aneroid Lake Facts for Kids. Kiddle Encyclopedia.