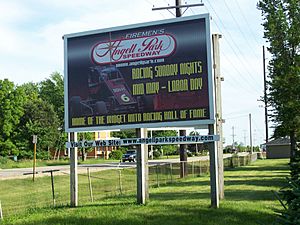 Angell Park Speedway has a 1/3 mile (0.54 km) dirt racetrack located in Sun Prairie, Wisconsin. The track has been run by the city's fire department since 1903. Racing occurs every Sunday approximately Memorial Day until Labor Day. Special racing events and the weather may alter the schedule. The races were sanctioned by the Badger Midget Auto Racing Association (BMARA), the oldest midget organization in the world. Some events are co-sanctioned by the United States Automobile Club (USAC). BMARA sanctions several midget car events at other nearby tracks. The World of Outlaws held their first sprint car races at the track in August 2016.

In addition to the racetrack, the facility features the National Midget Auto Racing Hall of Fame, a pavilion, and the Sun Prairie Firemans Park in the Prairie. The park was built by the Sun Prairie community on September 18, 2007 and was dedicated on October 7, 2007. The project was led by Sun Prairie residents Rebecca Ketelson and Anita Holcomb. Leather's and Associates was the project architect.

Night racing at Angell Park began May 29, 1949. With the lights installed, Kelly Peters of Lake Forest, IL set fast time, won his heat and captured the first feature race run under the lights. From that point forward, weekly Sunday night racing has been held at the facility except for a few shortened seasons for minor contract disputes in the late 1960s and early 1970s.

The track began hosting its first non-midget car races in 2007 when an occasional touring event was added to its program and by 2010 every race evening featured a class from another track or a touring series. The Angell Park Speedway board and the sanctioning body BMARA had a fall out before the 2010 season. The track ran its own sanction during May 2010. At the end of the month weekly track operation halted for the 2010 season except for special events (two USAC midget weekends and the Fireman's Nationals).

Some midget car drivers come from New Zealand and Australia during their country's winter to race during the United States' summer between May and September. The 2008 season featured Michael Pickens from Auckland, New Zealand (who stayed at one of the other driver's house) and Matt Smith from Newcastle, Australia.

Several notable racers raced at the track in its regular weekly series:

The track's most notable event is its 50 lap Fireman Nationals midget car event.

All content from Kiddle encyclopedia articles (including the article images and facts) can be freely used under Attribution-ShareAlike license, unless stated otherwise. Cite this article:
Angell Park Speedway Facts for Kids. Kiddle Encyclopedia.