Kids Encyclopedia Facts
This page is about the city. For the adjacent town, see Sun Prairie (town), Wisconsin.

Sun Prairie is a city in Dane County in the U.S. state of Wisconsin. A suburb of Madison, it is part of the Madison Metropolitan Statistical Area. The city's population was 29,441 at the 2010 U.S. Census. It is the second most populous city in Dane County after Madison. Sun Prairie became widely known for Jimmy the Groundhog when the rodent bit the mayor's ear during the city's 2015 Groundhog Day celebration. 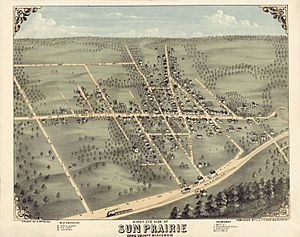 President Martin Van Buren commissioned a party of 45 men, including Augustus A. Bird, to build a capitol for the Territory of Wisconsin in Madison. The group of men left Milwaukee on May 26, 1837, and traveled for days in the rain. On June 9, the group emerged at the edge of the prairie and with the sun shining for the first time in days, carved the words "Sun Prairie" into a tree. Charles Bird returned to the area two years later and became the first settler.

The general soils associations in the Sun Prairie area include the Dodge-St. Charles-McHenry, Plano-Ringwood-Griswold, and Batavia-Houghton-Dresden Associations. The Dodge-St. Charles-McHenry soils are found in the eastern, southern, and central portions of Sun Prairie. This association has a varied landscape, which is mostly sloping to sloping with some areas on benches and in depressions. The Dodge, St. Charles and McHenry soils are gently sloping to mostly sloping and well drained to moderately well drained. The Sable soils in this association are nearly level and poorly drained. Most of the soils in this association have moderate permeability and a high available water capacity. Most also have slight to moderate limitations for urban uses and farming. 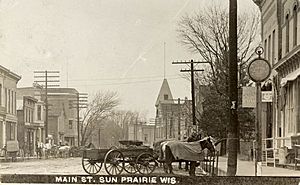 The landscape of the city consists mostly of gently rolling hills and plains. The elevation of the city averages about 984 feet (300 m) above mean sea level.

Sun Prairie has, in recent years, developed a number of traditional neighborhood developments (TND). Often referred to as "new urbanism", these neighborhoods focus on the pedestrian and the appearance of city streets. While these developments have sought to address the problems and concerns associated with conventional suburban development and urban sprawl, many occupy former farmland and undeveloped rural lands. The city's planners addressed the criticisms that they were "attempting to recreate "pretend" neighborhoods" by noting that the aim of the TND was to borrow those design ideas and features effective in older neighborhoods and adapting them to current needs.

The annual average precipitation at Sun Prairie is 32.95 inches (837 mm). Rainfall is fairly evenly distributed throughout the year, and the wettest month of the year is August with an average rainfall of 4.33 inches (110 mm). 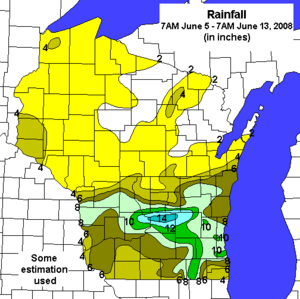 The city of Sun Prairie encounters occasional flooding because of the presence of hydric soils, spring melting and its proximity to the Koshkonong Creek. This condition is compounded by storm water runoff from development and urbanization in the upper reaches of the watershed. Many residents of the city believe that the problems with flooding are worsening, becoming more frequent over the last 14 years.

A flood on April 11, 2008, caused by heavy overnight rains that outpaced the city's storm drain system and leaked into the sewer system, resulted in flooding in residential basements. The city suffered considerably from the June 2008 Midwest floods.

There were 11,636 households of which 37.7% had children under the age of 18 living with them, 50.1% were married couples living together, 11.5% had a female householder with no husband present, 4.1% had a male householder with no wife present, and 34.3% were non-families. 26.1% of all households were made up of individuals and 7.6% had someone living alone who was 65 years of age or older. The average household size was 2.51 and the average family size was 3.08.

There were 7,881 households out of which 38.3% had children under the age of 18 living with them, 54.6% were married couples living together, 10.7% had a female householder with no husband present, and 31.0% were non-families. 23.8% of all households were made up of individuals and 7.4% had someone living alone who was 65 years of age or older. The average household size was 2.56 and the average family size was 3.07.

Four properties in Sun Prairie are listed in the National Register of Historic Places: the Dr. Charles G. Crosse House, the Fuhremann Canning Company Factory, the Adam and Mary Smith House, and the Sun Prairie Water Tower. The Crosse House was built in 1864 by a locally prominent physician and city leader. The Fuhremann Canning Company Factory, in use from 1900 to 1974, now lies vacant. The Adam and Mary Smith House was constructed in 1879 by Adam Smith, who had come to Wisconsin to do shingle work on the Wisconsin State Capitol. The Sun Prairie Water Tower, located at the junction of Columbus, Church and Cliff Streets, was designed by Frank Stegerwald and constructed in 1912 of stone, metal and wood. 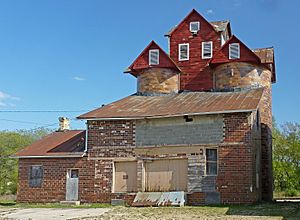 Chase Grain Elevator, built in 1922 and added to the National Register of Historic Places in 2010

"1990 Census data indicates that most Sun Prairie residents drive their own vehicles to work (79.4%). A fair number of residents use carpooling as their primary transportation to work (13.4%). Other methods of transportation remain a minor factor."

Prior to 1947, WIS 19 followed the current route of US-18 between Bridgeport and Madison. The route then passed through downtown Madison and followed then WIS 31 (part of the current US-151) to Sun Prairie. East of Sun Prairie the route followed its present-day alignment to Watertown. The route then followed present-day WIS 16 to Waukesha and east from there along present-day WIS 59 into Milwaukee. When the U.S. Highway system was implemented, WIS 19's western terminus was relocated to Madison. The portion between Madison and Sun Prairie remained despite the debut of US-151 as did the eastern portion that became concurrent with US-16. In 1947, the eastern terminus was moved to Watertown, the section along US-151 was removed, and the portion between Mazomanie and Sun Prairie was implemented.

The part of WIS 19 roughly from those interstates west to WIS 113 had at one time been on the corridor of a planned beltline route around the north side of Madison. The current status of the parkway is uncertain.

Sun Prairie is bordered by the following county roads:

Sun Prairie has no bus service outside of the school buses that serve area schools, but instead has provided a Shared Ride Taxi service for the past decade, whereby residents can travel throughout the city for a small charge, sometimes sharing the ride with other passengers. This service is subsidized by grants obtained by the city, which also provide for low income transit via the use of identification cards. Corner service is also available at specific street locations during the academic school year, and is intended primarily for middle-school and high school students. While the taxi service is exclusively for the city, Shared Taxi also provides for thrice-daily shuttle service (8:30 am, 12:30pm, 4:30pm) to nearby East Towne Mall, on the northeastern edge of Madison, thus allowing commuters to use the Madison Metro bus system to travel within Madison.

Although Sun Prairie has tracks for freight trains to the south of the city, the only passenger train to serve the area (including Madison) is Amtrak's Empire Builder, which operates in the Midwestern and Northwestern United States. The route runs from Chicago to the Pacific Northwest, arriving in nearby Columbus (CBS). The ridership on the train has increased slowly, averaging 16,850 per year traveling to and from Columbus, despite the population growth in Sun Prairie. Travel time to and from Chicago is slightly under three hours.

Sun Prairie's Jimmy the Groundhog is the local favorite on Groundhog Day in February. The United States Congressional Record described the city as the "Groundhog Capital of the World" in 1955.

During the city's Groundhog Day celebration on February 2, 2015, Jimmy bit Mayor Jonathan Freund's ear while being held by Jimmy's caretaker. The next day, Freund issued a proclamation that officially pardoned and absolved Jimmy "of any perceived wrongdoing and charges" under the city's ordinance. The proclamation stated that Jimmy had "created an international media sensation, thereby helping the world to learn more about our great City". Two weeks later, Freund came in last of three candidates in the city's mayoral primary election.

Following the biting incident, the United States Department of Agriculture and the Wisconsin Department of Natural Resources informed the organization that had sponsored Sun Prairie's celebration that capturing wild animals for exhibit was against the law. The organization's manager then reported that Jimmy had escaped from his hutch before she could respond to these complaints. Sun Prairie's next Groundhog Day celebration on February 2, 2016, featured a caged groundhog purchased for $1,200, an elected costumed "mascot" and a different mayor.

In mid-June, the city holds a local Taste of the Arts fair, in conjunction with the Georgia O'Keeffe Celebration. Artwork is exhibited and instructional classes for arts and crafts are held. A Georgia O'Keeffe recreation discussion is held.

The Flags of Freedom Field Show is a day-long series of events in July, involving high-school marching band competitions that feature bands from throughout the United States and Canada. It is hosted by the Sound of Sun Prairie.

In mid-August of each year, Sun Prairie hosts a Sweet Corn Festival, which is attended by over 100,000 people from all over the Midwest. Over 70 short]</ref>

All content from Kiddle encyclopedia articles (including the article images and facts) can be freely used under Attribution-ShareAlike license, unless stated otherwise. Cite this article:
Sun Prairie, Wisconsin Facts for Kids. Kiddle Encyclopedia.