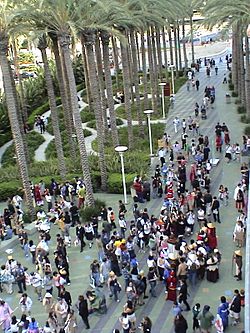 An anime convention is an event where people who like anime and things that are Japanese come together. Most conventions take all weekend, and many of the people dress up like characters from anime and video games and go to many different kinds of events during the convention.

People who go to anime conventions do a lot of different things. Many of them dress up in costumes, play video games, sing in karaoke, and watch various anime that yet to be widely released.

A dealer's room is also often popular, and it usually has many people selling unique items related to anime, Japan, or video games. A similar room, called the artist's alley, is also often available for local and beginning artists to promote themselves and sell their items as well.

Conventions also have talks about anime, video rooms, and places to meet artists.

Most conventions bring famous people to the convention who are called guests. The people who are at the convention can talk to these guests, get autographs, and sometimes take pictures.

All content from Kiddle encyclopedia articles (including the article images and facts) can be freely used under Attribution-ShareAlike license, unless stated otherwise. Cite this article:
Anime convention Facts for Kids. Kiddle Encyclopedia.