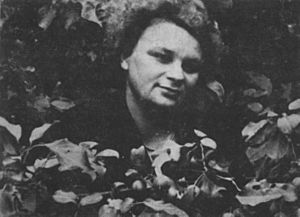 Anna Kamieńska (12 April 1920 in Krasnystaw – 10 May 1986 in Warsaw) was a Polish poet, writer, translator and literary critic who wrote many books for children and adolescents.

Kamieńska was born on 12 April 1920, in Krasnystaw. Her parents were Tadeusz Kamienski and Maria z Cękalskich. Her early years were spent in Lublin. She frequently stayed with her grandparents in Świdnik.

Her father died early, so the burden of bringing up four daughters fell on her mother. Anna's first poetry was composed when she was about 14 (1936), published in "Płomyczek" under the auspices of Joseph Czechowicz. From 1937, she studied at the Pedagogical School in Warsaw. During the Nazi occupation, she lived in Lublin, and taught in underground village schools. After graduating from college in Lublin, she studied classical philology - initially at the Catholic University of Lublin, and then at the University of Lodz.

Anna and Jan worked together on translations of Russian poetry and drama, and edited numerous books. In 1967, Jan suddenly fell ill with cancer and died 22 December. In her grief, Kamieńska returned to the Roman Catholic Church, which deeply influenced her later works.

She wrote fifteen books of poetry, two volumes of "Notebooks", providing a shorthand record of her readings and self-questioning, three volumes of commentaries on the Bible, and translations from several Slavic languages as well as from Hebrew, Latin and French. Her poems record the struggles of a rational mind with religious faith, addressing loneliness and uncertainty in a direct, unsentimental manner. While exploring the meaning of love and grief, and the yearning for love, Kamienska's poetry still expresses a quiet humor and a pervasive sense of gratitude for human existence and for a myriad of creatures, hedgehogs, birds, and "young leaves willing to open to the sun".

Kamienska's poems also touch on Judaism, and the total loss of Jewish culture and the Yiddish language from Poland as a result of the Holocaust.

All content from Kiddle encyclopedia articles (including the article images and facts) can be freely used under Attribution-ShareAlike license, unless stated otherwise. Cite this article:
Anna Kamieńska Facts for Kids. Kiddle Encyclopedia.