Anna Ringsred (born September 27, 1984) is an American speed skater who represented the United States at the 2014 Winter Olympics. She began speed skating at age 13 and made the United States junior team while in high school. In 2004, she qualified for the Junior World Allround Championships, placing 22nd. She qualified for World Championship events in 2007, 2008, and 2010, with her best finish being a fifth place in the 2007 team pursuit.

Ringsred had four third-place finishes at the 2010 National Championships, but was not selected to the 2010 Olympic team. She retired from speed skating at the end of the season, but launched a comeback effort in 2012. She made the 2013 Allround and Single Distance World Championship teams. Ringsred placed third in the 3000 meters at the 2013–2014 National Championships and followed it up with a second place in the event at the United States Olympic trials to make her first Olympic team. At the Olympics, she placed 26th in the 3000 meters.

Anna Ringsred was born September 27, 1984, in Duluth, Minnesota. She was a ski jumper until she broke her ankle at age 13. At that time, she saw an ad for speed skating in the Duluth News Tribune and decided to give it a try.

Ringsred attended Montessori School of Duluth, and graduated from Duluth Marshall High School in 2003. After high school, she moved to Calgary, Alberta to train. 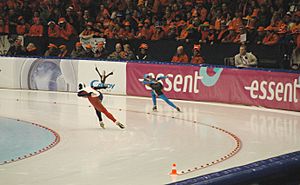 Entering the 2010 National Championships/Olympic Trials, Ringsred was considered a favorite to make the Olympic Team. She set a personal best and placed third in the 500 meters. She placed third in 1000 meter, 1500 meter, and 5000 meter events, and fourth in the 3000 meters. Ringsred was not, however, selected to the Olympic team. After narrowly missing the team, she retired from speed skating, later explaining "I wasn't handling the pressure very well, and I was getting tired of training every day and pushing myself". She completed a degree in chemical engineering at University of Calgary and then spent time backpacking around Europe. She got a full-time job as an engineer in Calgary, but after a few months on the job she found she missed speed skating.

In 2012, Ringsred decided to return to speed skating to make one final try at the Olympics. She consulted with a sports psychologist to get better control of her nerves that had often made competition unpleasant. "I used to have a fear of racing," she explained. "It was always scary and nerve-racking ... [Now] I just go out there and forget about the results ... I sort of fell in love with it again." In the past, her best event was the 1000 meters, but after her comeback her best results have been in the distance events. 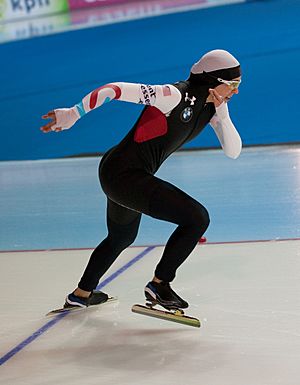 Ringsred accelerates out of her starting position during a 1500-meter race in 2013.

Ringsred entered the 2014 United States Olympic Trials, planning to retire at the end of the season regardless of what happened in the Trials. In her first event, the 3000 meters, she placed second and qualified for the United States Olympic Team with a time of 4:13.80. "I was so scared going into this", she said afterwards. "A lot was at stake. This was my last chance. I can't believe it. I made it." Ringsred went on to compete in all five events at the Trials, placing in the top ten in all of them. She is no longer sure she will retire after the Olympics. "This puts her on the map, and with advanced training and coaching opportunities, who knows how far she can take it?" remarked her longtime coach Andrey Zhuikov. Prior to the Olympic Trials, Ringsred was considered a very good all-around skater, but not good enough at any given event to make the Olympics.

Ringsred volunteers at the local homeless shelter in her spare time. She currently lives in Calgary.

All content from Kiddle encyclopedia articles (including the article images and facts) can be freely used under Attribution-ShareAlike license, unless stated otherwise. Cite this article:
Anna Ringsred Facts for Kids. Kiddle Encyclopedia.