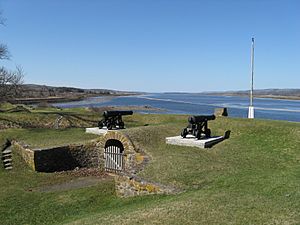 View of Annapolis Basin from Fort Anne, at Annapolis Royal

The Annapolis Basin is a sub-basin of the Bay of Fundy, located on the bay's southeastern shores, along the northwestern shore of Nova Scotia and at the western end of the Annapolis Valley.

The basin takes its name from the Annapolis River, which drains into its eastern end at the town of Annapolis Royal. The basin measures approximately 24 kilometres (15 mi) northeast-southwest and 6 kilometres (3.7 mi) at its widest from northwest to southeast.

The Bay Ferries Limited ferry service operating across the Bay of Fundy between Digby and Saint John maintains a terminal on the western shore of the basin near the Digby Gut.

Rivers which drain into the basin include:

Two major islands are located in the basin:

A former Royal Canadian Navy base and decommissioned Canadian Forces Base is located between Deep Brook and Clementsport on the southeast shore of the basin - see CFB Cornwallis.

All content from Kiddle encyclopedia articles (including the article images and facts) can be freely used under Attribution-ShareAlike license, unless stated otherwise. Cite this article:
Annapolis Basin Facts for Kids. Kiddle Encyclopedia.