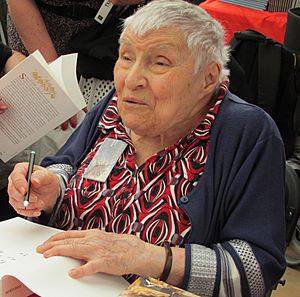 Anne Golon (17 December 1921 – 14 July 2017) was a French author, better known to English-speaking readers as Sergeanne Golon. She was most known for a series of novels about a heroine called Angelique. She was born in Toulon, France. She was married to his writing partner Serge Golon until his death in 1972.

Golon died of colorectal cancer on 14 July 2017 in Versailles, France at the age of 95.

All content from Kiddle encyclopedia articles (including the article images and facts) can be freely used under Attribution-ShareAlike license, unless stated otherwise. Cite this article:
Anne Golon Facts for Kids. Kiddle Encyclopedia.