The Annunciation Greek Orthodox Cathedral is a Greek Orthodox cathedral located in Chicago, Illinois. It is the mother church of the Metropolis of Chicago. The current membership includes some 400 families. 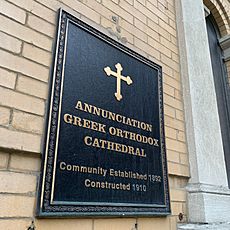 Plaque of the Cathedral.

The Annunciation Greek Orthodox Cathedral was established in 1892 by a Greek immigrant community from Laconia and the Greek Islands. In 1909, the Greek Orthodox community paid $18,000 for the lot of city land on which the cathedral stands today.

In 1910, the cathedral was complete with a total cost of around $100,000. It was built after an Athenian cathedral and is currently the oldest surviving Chicago building in the style of a Byzantine church.

The burden of the Great Depression prompted the Greek Orthodox community to rally together and save the churches from financial ruin through various fundraising activities. Also in this era, the entire building was raised from its foundation and moved back to accommodate for the widening of LaSalle Street.

All content from Kiddle encyclopedia articles (including the article images and facts) can be freely used under Attribution-ShareAlike license, unless stated otherwise. Cite this article:
Annunciation Greek Orthodox Cathedral (Chicago) Facts for Kids. Kiddle Encyclopedia.