Anoteropsis hilaris, commonly referred to as the garden wolf spider, is a species of wolf spider that is endemic to New Zealand.

Anoteropsis hilaris was first described three times in 1877 by Ludwig Carl Christian Koch in the same paper as Lycosa hilaris, Lycosa umbrata and Pardosa vicaria. In the same year, Peter Goyen described Lycosa virgata and Lycosa taylori. In 1899, Eugene Simon described Lycosa tremula. In 1951, Carl Friedrich Roewer renamed L. virgata as Lycosa virgatella. In 1955, Roewer would transfer L virgatella and L. taylori to the Pardosa genus, L. tremula to the Arctosa genus and transfer L. umbrata to the Avicosa genus. In 1960, Roewer would transfer A. tremula to the Arctosella genus. In 1964, Ray Forster described Lycosa subantarctica. In 2002, Cor Vink placed Lycosa hilaris in the Anoteropsis genus and recognized all aforementioned names as synonyms of A. hilaris.

Anoteropsis hilaris is small with a body length of 4.9-11mm (male) or 4.9-11.8mm (female). The main body has a pale yellow stripe on the dorsal side running from the front of the head to about two thirds down the abdomen. The abdomen and cephalothorax vary in colouration, but are typically brown with darker colours near the medial stripe. The legs are also variable but are typically yellow-brown, but may also have green segments.

The eggsacs have a pinkish tinge when first laid.

Anoteropsis hilaris can be distinguished from other species of Anoteropsis by the morphology of its reproductive system. 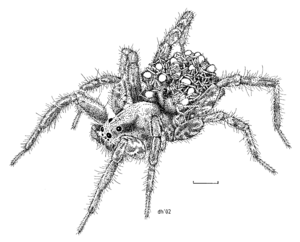 Anoteropsis hilaris is widespread throughout both main islands of New Zealand and on some of New Zealand's smaller islands such as Stewart Island, Three Kings Islands, Snares Island and Auckland Islands. The spider occurs in grassland scrub habitats everywhere except in alpine zones. A. hilaris is one of the most abundant predatory arthropods in New Zealand's agricultural ecosystems.

All content from Kiddle encyclopedia articles (including the article images and facts) can be freely used under Attribution-ShareAlike license, unless stated otherwise. Cite this article:
Anoteropsis hilaris Facts for Kids. Kiddle Encyclopedia.