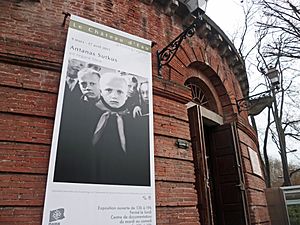 Exhibition of Sutkus's work at the Château d'Eau, Toulouse

Antanas Sutkus (born 27 June 1939 in Kluoniškiai, Kaunas district) is a renowned Lithuanian photographer and recipient of the Lithuanian National Prize. He also received the Order of the Lithuanian Grand Duke Gediminas. He was one of the co-founders and a President of the Photography Art Society of Lithuania (Lithuanian: Lietuvos fotografijos meno draugija).

Sutkus's series People of Lithuania is considered one of his most important works. It is a continuing project begun in 1976 to document the changing life and people of Lithuania. Working at the time when Lithuania (as the Lithuanian SSR) was part of the Soviet Union, Sutkus focused on black and white portraits of ordinary people in their everyday life rather than the model citizens and workers promoted by Soviet propaganda. Sutkus had an opportunity to spend time with Jean-Paul Sartre and Simone de Beauvoir in 1965 when they visited Lithuania. One image, taken against the white sand of Nida, is highly regarded as capturing Sartre's ideas.

All content from Kiddle encyclopedia articles (including the article images and facts) can be freely used under Attribution-ShareAlike license, unless stated otherwise. Cite this article:
Antanas Sutkus Facts for Kids. Kiddle Encyclopedia.