Anthurium is a large plant genus of about 600- 800 (possibly 1,000) species, belonging to the arum family (Araceae). Anthurium can also be called "Flamingo Flower" or "Boy Flower", both referring to the structure of the spathe and spadix.

The species has neotropical distribution; mostly in wet tropical mountain forest of Central America and South America, but some in semi-arid environments. 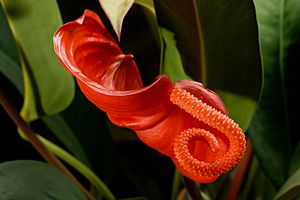 Anthurium is a genus of herbs often growing as epiphytes on other plants. Some are terrestrial. The leaves are often clustered and are variable in shape. The inflorescence bears small flowers which are perfect, containing male and female structures. The flowers are contained in dense spirals on the spadix. The spadix is often elongated into a spike shape, but it can be globe-shaped or club-shaped. Beneath the spadix is the spathe, a type of bract. This is variable in shape, as well, but it is lance-shaped in many species. It may extend out flat or in a curve. Sometimes it covers the spadix like a hood. The fruits develop from the flowers on the spadix. They are juicy berries varying in color, usually containing two seeds.

The spadix and spathe are a main focus of Anthuirium breeders, who develop cultivars in bright colors and unique shapes. Anthurium scherzerianum and A. andraeanum, two of the most common taxa in cultivation, are the only species that grow bright red spathes. They have also been bred to produce spathes in many other colors and patterns.

Anthurium plants are poisonous due to calcium oxalate crystals. The sap is irritating to the skin and eyes.

All content from Kiddle encyclopedia articles (including the article images and facts) can be freely used under Attribution-ShareAlike license, unless stated otherwise. Cite this article:
Anthurium Facts for Kids. Kiddle Encyclopedia.