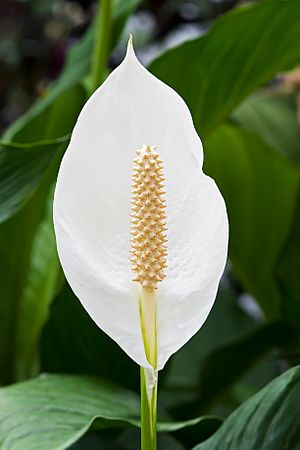 Araceae are a family of monocotyledonous flowering plants in which flowers are borne on a type of inflorescence called a spadix. The spadix is usually accompanied by, and sometimes partially enclosed in, a 'spathe' or leaf-like bract.

Also known as the Arum family, members are often colloquially known as aroid. This family of 107 genera and over 3700 species is most diverse in the New World tropics, although also distributed in the Old World tropics and north temperate regions.

These plants often have rhizomes or tubers with calcium oxalate crystals or 'raphides' and commonly with milky sap. The leaves are alternate, simple or compound, petiolate, sometimes very large, and usually with a sheathing base.

Some genera of araceae include:

All content from Kiddle encyclopedia articles (including the article images and facts) can be freely used under Attribution-ShareAlike license, unless stated otherwise. Cite this article:
Araceae Facts for Kids. Kiddle Encyclopedia.