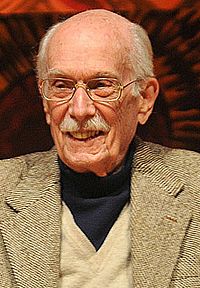 Antonio Candido de Mello e Souza (July 24, 1918 – May 12, 2017) was a Brazilian writer, professor, sociologist and literary critic. As a critic of Brazilian literature, he was thought as having been one of the foremost scholars on the subject by Brazilian universities. He was the co-winner of the Prêmio Jabuti for essays in 1965 and was awarded the Prêmio Machado de Assis in 1993, the Camões Prize in 1998 and the Alfonso Reyes International Prize in 2005. He was born in Rio de Janeiro, Brazil.

Candido died on May 12, 2017 at the Albert Einstein Hospital in São Paulo, Brazil from complications of a hiatus hernia, aged 98.

All content from Kiddle encyclopedia articles (including the article images and facts) can be freely used under Attribution-ShareAlike license, unless stated otherwise. Cite this article:
Antonio Candido Facts for Kids. Kiddle Encyclopedia.