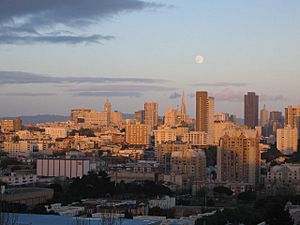 Anza Vista is a neighborhood in the Western Addition district of San Francisco, California.

Anza Vista is located between Geary Boulevard to the north, Turk Street to the south, Masonic Avenue to the west and Divisadero Street to the east. Some of the surrounding areas between The Presidio, Golden Gate Park, the Panhandle, and the Western Addition may sometimes be referred to as part of the Anza Vista neighborhood.

It sits atop the former location of the San Francisco Calvary Cemetery. Graves in this cemetery, along with all graves in San Francisco, were moved in the 1930s and 1940s to Colma after burials in San Francisco were banned in 1902 at all but two cemeteries to increase available real estate.

A Target and Best Buy anchored shopping center, The City Center, is located on Geary Boulevard and Masonic Avenue in the north-western corner of the neighborhood. Anza Vista is also the location of a Kaiser Permanente hospital on Geary Boulevard at St. Joseph's Avenue, and the Raoul Wallenberg Traditional High School on Nido Avenue.

All content from Kiddle encyclopedia articles (including the article images and facts) can be freely used under Attribution-ShareAlike license, unless stated otherwise. Cite this article:
Anza Vista, San Francisco Facts for Kids. Kiddle Encyclopedia.