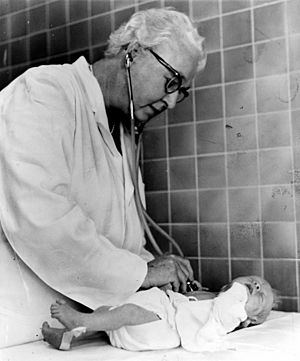 The Apgar score is used in medicine. It is a quick way of measuring how healthy a newborn baby is.

Virginia Apgar invented the Apgar score in 1952. She was an anesthesiologist, and created the score to measure how babies were affected by anesthesia given to their mothers during childbirth.

Today, the Apgar score is very commonly used by doctors, nurses, midwives, emergency medical technicians (EMTs), and other medical professionals. One of the reasons it is so popular is that doing an Apgar test is very quick. It usually takes less than a minute, sometimes just seconds.

When an Apgar test is done, five simple things about the newborn baby are checked. The newborn gets a score of 0, 1, or 2 on each of these give things. The scores are added up, and the total is the newborn's Apgar score.

"Apgar" is the name of the woman who invented the Apgar scale. But "APGAR" is also a backronym that stands for the things the Apgar scale checks. These are Appearance, Pulse, Grimace, Activity, and Respiration.

The five things that make up the Apgar score:

What the scores mean

The Apgar test is usually done one minute after birth, and again five minutes after birth. It may be repeated later if the score is low and stays low.

The main goal of the Apgar score is to see whether the newborn needs medical help. Usually:

If a newborn has a low Apgar score one minute after birth, this does not mean the baby is going to have long-term health problems. This is especially true if the Apgar score is better five minutes after birth.

But an Apgar score that stays below 3 at later times—like 10, 15, or 30 minutes after birth—may show that the newborn has brain damage. These newborns are a little more likely to have cerebral palsy. However, the Apgar test cannot predict (say for sure) whether a baby will have long-term health problems.

All content from Kiddle encyclopedia articles (including the article images and facts) can be freely used under Attribution-ShareAlike license, unless stated otherwise. Cite this article:
Apgar score Facts for Kids. Kiddle Encyclopedia.