Apollo is a borough in Armstrong County, Pennsylvania, United States, 35 miles (56 km) northeast of Pittsburgh in a former coal-mining region. Apollo was settled in 1790, laid out in 1816, and incorporated as a borough in 1848. The population was 1,647 at the 2010 census.

The area was sectioned in 1769, following the Treaty of Fort Stanwix, as a farm known as "Warren's Sleeping Place", named after a Native American trader from the area named Edward Warren. It was soon surveyed and divided into lots, with the town of Warren officially being added to the Greensburg register on November 9, 1816. The log cabin home of the Drake family still stands in the area, and is one of the oldest buildings in Armstrong County.

With the introduction of the post office, the area was officially renamed from Warren to Apollo in 1848 to avoid confusion with the post office of another town in Pennsylvania of the same name.

The Roaring Run Recreation Area is located one mile upriver (southeast) of Apollo and can be accessed via the Apollo Kiski River Trail. Stone remnants of the Western Division of the Pennsylvania Mainline Canal, that passed through Apollo and operated between 1825-1850, can be found along the Roaring Run Trail. The canal made use of the Kiskiminetas River using a system of slackwater dams, and the boats floated on the river, entering a lock located at the mouth of Roaring Run. From there the canal ran along the path of the current Roaring Run Trail, through the entire length of the borough, entering the Kiskiminetas River again across the river from where the current borough of East Vandergrift is situated.

The Drake Log Cabin was listed on the National Register of Historic Places in 1983. 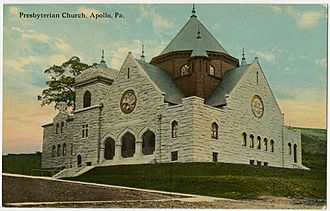 There were 762 households, of which 28.7% had children under the age of 18 living with them, 42.3% were married couples living together, 15.2% had a female householder with no husband present, and 38.6% were non-families. 34.5% of all households were made up of individuals, and 16.9% had someone living alone who was 65 years of age or older. The average household size was 2.29 and the average family size was 2.92.

All content from Kiddle encyclopedia articles (including the article images and facts) can be freely used under Attribution-ShareAlike license, unless stated otherwise. Cite this article:
Apollo, Pennsylvania Facts for Kids. Kiddle Encyclopedia.