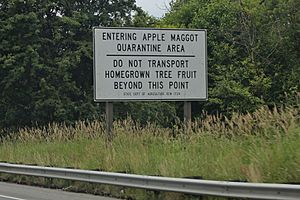 A quarantine sign on State Route 522 near Woodinville, Washington

The Apple Maggot Quarantine Area is a permanent quarantine area established by the U.S. state of Washington. The quarantine was authorized under Washington state law and the area's boundaries are periodically reset by the state's Department of Agriculture. The quarantine was declared in the early 1980s to arrest the spread of the apple maggot into a portion of eastern Washington. 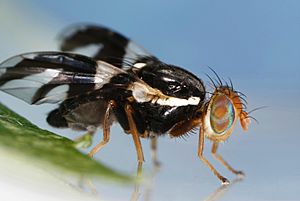 The Apple Maggot Quarantine Area was established to control the spread of the apple maggot (pictured) into a protected agricultural area of eastern Washington.

The apple maggot, which is not indigenous to the Pacific Northwest, was discovered to have arrived in Washington in 1980. The quarantine was declared thereafter and is designed to protect Washington's core apple growing regions from infestation. The Washington State Department of Transportation installed 70 signs along highways around the state in 1985 to warn of the quarantine.

Authority for the quarantine is codified under Title 17 of the Revised Code of Washington.

Washington exported $718 million worth of apples in 2016, making apples the state's seventh largest export, and the apple has been declared the official state fruit. Almost two-thirds of all apples grown in the United States are produced in Washington. According to the Washington Apple Commission, the quality standards for Washington apples "are more stringent than grading standards used in any other growing region in the world". A mandatory inspection program requires apples, all of which are hand-picked, to meet this set of standards that, in some criteria factors, exceed those set by the United States Department of Agriculture.

Each year, the Washington state Department of Agriculture deploys apple maggot traps to a selection of sites in the state with between 5,500 to 8,500 traps deployed annually. The traps are yellow paneled, adhesive traps baited with ammonium carbonate lures. The area surrounding locations which successfully trap apple maggots may be further studied by analyzing fruit in the area for the presence of apple maggot larvae and, ultimately, placed in the quarantine zone. In 2011, for instance, the trapping of 35 apple maggots at 23 locations in Chelan County resulted in a recommendation to extend the quarantine zone to the western part of that county. 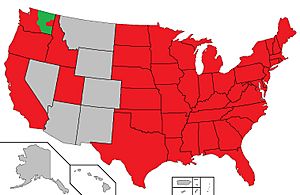 The states of Oregon, California, Idaho, and Utah, all areas of the eastern United States, and all "foreign countries where apple maggot is established" have also been placed under quarantine by Washington. In addition to these areas, as of 2017, all or portions of the state's counties of Chelan, Clallam, Clark, Cowlitz, Grays Harbor, Island, Jefferson, King, Kitsap, Klickitat, Lewis, Lincoln, Mason, Pacific, Pierce, Snohomish, Spokane, Skagit, Skamania, Thurston, Wahkiakum, Whatcom, and Yakima, are also quarantined.

Washington State University's Tree Fruit Research and Extension Center has cited the fact that "apple maggots have never been found in commercially packed fruit in the state" as evidence of the quarantine's efficacy.

In addition, under state law pest control officials can order property owners to spray with pesticides trees in which the apple maggot has been observed.

All content from Kiddle encyclopedia articles (including the article images and facts) can be freely used under Attribution-ShareAlike license, unless stated otherwise. Cite this article:
Apple Maggot Quarantine Area Facts for Kids. Kiddle Encyclopedia.