Arabella (Scottish Gaelic: Am Bog) is a village in Highland, Scotland. 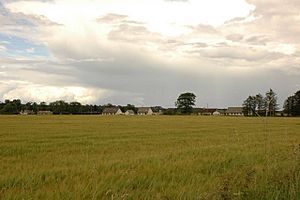 Named after the farm which was set aside as small holdings in 1918 for returning servicemen. The original Farm was named after the wife of Hugh Rose ([1]) a wealthy land owner who made his fortune in the West Indies in the late 18th century. Arabella Phipps married Hugh Rose in 1799 in London. She lived in Scotland for 7 years and had three children. She died in mysterious circumstances in 1806.

All content from Kiddle encyclopedia articles (including the article images and facts) can be freely used under Attribution-ShareAlike license, unless stated otherwise. Cite this article:
Arabella, Highland Facts for Kids. Kiddle Encyclopedia.