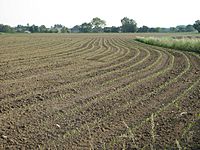 Agriculture is important in Arbigny

Arbigny is a commune. It is found in the Auvergne-Rhône-Alpes region in the Ain department in the east of France. In 2009, 383 people lived in the commune. The inhabitants are the Arbignerons. The location was already populated in prehistory. The local economy is mainly based around agriculture. The most important monuments in the commune are the ruins of an old castle and a stele commemorating Royal Air Force landings during World War Two.

All content from Kiddle encyclopedia articles (including the article images and facts) can be freely used under Attribution-ShareAlike license, unless stated otherwise. Cite this article:
Arbigny Facts for Kids. Kiddle Encyclopedia.