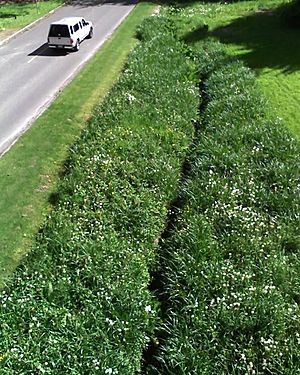 Arboretum Creek is a stream in Seattle, Washington, United States, whose entire length of approximately 4,000 feet (1,200 m) lies within the boundaries of the Washington Park Arboretum. Its average channel width is 4 feet (1.2 m) and its average channel depth is 2 feet (0.61 m).

The creek's source is a spring-fed stream in the Alder Creek Natural Area, three publicly owned properties on 26th Ave East between East Helen and Prospect streets. The stream feeds the koi pond in Washington Park's Japanese Garden, near the playfield at the park's southern end. It also receives runoff from Rhododendron Glen and the Woodland Garden, as well as sub-surface drainage from the neighboring course of the Broadmoor Golf Club. It empties into Lake Washington via Willow Bay, itself a minor arm of Union Bay, having passed through numerous culverts under Lake Washington Boulevard.

All content from Kiddle encyclopedia articles (including the article images and facts) can be freely used under Attribution-ShareAlike license, unless stated otherwise. Cite this article:
Arboretum Creek Facts for Kids. Kiddle Encyclopedia.