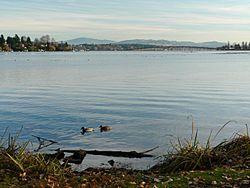 Union Bay viewed from the Natural Area with Laurelhurst, the Evergreen Point Floating Bridge and Madison Park (left to right) in the background 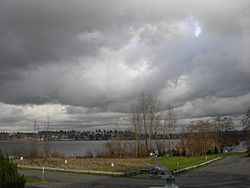 Winter view across Union Bay toward Laurelhurst, from the building that formerly housed the Museum of History & Industry (MOHAI) 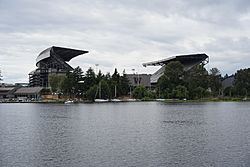 Looking west from Union Bay at Husky Stadium in 2015

Union Bay is a body of water located in Seattle, Washington. Part of Lake Washington, it is bounded by the Laurelhurst neighborhood to the north and the Montlake and Madison Park neighborhoods to the south. The Evergreen Point Floating Bridge, which carries State Route 520, crosses over a portion of the bay.

Marsh Island and Foster Island are located in Union Bay, and are connected to the mainland (and each other) by the Arboretum Waterfront Trail and the Foster Island Trail. Union Bay ends at the eastern opening of the Montlake Cut, which connects Union Bay with Portage Bay (an arm of Lake Union) to the west—this marks the beginning of the Lake Washington Ship Canal, which runs through Seattle and connects Lake Washington to Puget Sound.

Broken Island is adjacent to Husky Stadium and was formed in 1916 when Lake Washington was lowered several feet by the opening of the Lake Washington Ship Canal. The island, and the wetlands in which it sits on the lake's shore, were "the result of conversion of shallow water lake habitats following lake level lowering." The island's soil is mostly peat laid down from earlier times.

When the level of Lake Washington was dropped nearly nine feet (2.7 m) in 1916 as a result of the opening of the Ship Canal, a good portion of Union Bay and Union Bay Marsh and wetland became dry land, furthered by landfill activities. The marsh and much of the bay was filled from 1911 to 1967. The Montlake Landfill (in use from 1926 to 1967) was the fictional home of television clown J. P. Patches, resident 1958 through 1981. The University Village shopping center (1956) and most of the east main campus of the University of Washington (UW) but for Husky Stadium sit on this land today. What remains of Union Bay Marsh is the restored remnant within the Union Bay Natural Area of the UW.

As well as providing the outlet for Lake Washington, Union Bay receives the water of Arboretum Creek, and Ravenna Creek via pipeline from Ravenna Park through south Ravenna, daylighted past the restored Union Bay Natural Area.

The shores of what is now Union Bay have been inhabited since the end of the last glacial period, about 10,000 years ago. Ancestors of the Native American Duwamish tribe today, until the 1850s the Dkhw’Duw’Absh, "the People of the Inside", of the (Skagit-Nisqually) Lushootseed Coast Salish nations had villages around Union Bay.

The village of hehs-KWEE-kweel ("skate") was of the hloo-weelh-AHBSH (from s'hloo-WEELH, "a tiny hole drilled to measure the thickness of a canoe"), for the narrow passage through then-large and resource-rich Union Bay marsh. Traces of the marsh survive as the Union Bay Natural Area and the Foster Island area of north Washington Park Arboretum. The trees and the island of Stitici (Stee-tee-tchee) were their ceremonial burial ground. Stitici, Little Island, is now called Foster Island. The village was at the northeast tip of what is now Madison Park. One of the longhouses (forerunners of cohousing for tens of people) may have been used as a potlatch house. The Duwamish Tribe is today leveraging the sacred site in the path of substantial enlargement of State Route 520 through south Union Bay between Redmond and Interstate 5, in their quest for recognition.

The prominent village of SWAH-tsoo-gweel ("portage") was on an abundant and much larger Union Bay, and what is now Ravenna was their backyard before the arrival of European settlers, Laurelhurst in summer. The Seattle, Lake Shore and Eastern Railway was built around 1886 along what is now the Burke-Gilman Trail, following what was the shoreline past where the UW power plant and University Village are today. A longhouse was near the present UW power plant (across Montlake Boulevard from the IMA building), others were around the north shores which were about mile farther north than today, and shores east of what is now the Union Bay Natural Area, with a longhouse or two between what is now the Center for Urban Horticulture and Children's Hospital. Villages were diffuse.

Cheshiahud or Lake John and his family were among the memorable residents around Union Bay in the early decades of Seattle.

All content from Kiddle encyclopedia articles (including the article images and facts) can be freely used under Attribution-ShareAlike license, unless stated otherwise. Cite this article:
Union Bay (Seattle) Facts for Kids. Kiddle Encyclopedia.