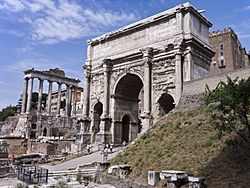 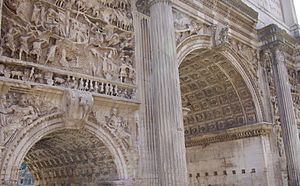 Close-up of relief of the Arch

The Arch of Septimius Severus (Italian: Arco di Settimio Severo) is at the northwest end of the Roman Forum. It is a white marble triumphal arch. It was dedicated in 203 AD after the Parthian victories of Emperor Septimius Severus and his two sons. Two campaigns were fought against the Parthians in 194/195 and 197–199 AD.

The sons were Caracalla and Geta. After the death of Septimius Severus, his sons were initially joint emperors. Caracalla had Geta assassinated in 212; Geta's memorials were destroyed. All images or mentions of him were removed from public buildings and monuments. So, Geta's image and inscriptions were removed from the arch (damnatio memoriae).

All content from Kiddle encyclopedia articles (including the article images and facts) can be freely used under Attribution-ShareAlike license, unless stated otherwise. Cite this article:
Arch of Septimus Severus Facts for Kids. Kiddle Encyclopedia.