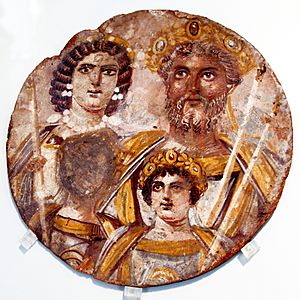 The face at the bottom left was erased because of damnatio memoriae.

Damnatio memoriae is a Latin practice or phrase that means "condemnation of memory". It means that a person's existence should be cut out of history. Actually, it was never totally achieved. In practice it meant removing the name from official records and monuments. That left plenty of letters and scrolls from which historians have pieced together the information we have.

All content from Kiddle encyclopedia articles (including the article images and facts) can be freely used under Attribution-ShareAlike license, unless stated otherwise. Cite this article:
Damnatio memoriae Facts for Kids. Kiddle Encyclopedia.