The shores of this archipelago has twenty-two coastal villages. Around 2600 people were living on those islands in 2011. Islands Dupas and Saint-Ignace-de-Loyola are partially urbanized. The majority of the other islands are used for agriculture and grazing farm animals.

A network of small roads, often unpaved crosses the riparian environment of the islands. The islands of Saint-Ignace-de-Loyola, Dupas and Castors (Beavers) are connected to the north side of St. Lawrence River by a small network of bridges. The connection between the two sides of St. Lawrence River) is provided by a ferry service between Sorel and Saint-Ignace Island (the largest island of the archipelago). Most of the other islands are accessible only by boat. The south side of the river, the "Île des Embarras" (Embarrassment Island) is the smallest of the inhabited islands.

The Archipelago of Lake Saint Pierre is a delta from the last glaciation and modified by the alluvium of St. Lawrence River. Following the withdrawal of the ice cap, the Sorel Islands region was invaded by the Champlain Sea which is then withdrawn gradually, about 12000 years ago. Clayey marine sediments were deposited at the bottom of the water.

The visible part of the islands of the Archipelago is formed of recent alluvium. These deposits with a maximum height of 7 to 8 metres (23 to 26 feet) above the river level consist mainly of silt deposited by the Champlain Sea at the back that forced marine waters this time to integrate the current riverbed. Today, the same phenomenon is repeated annually during spring flooding while the waters of the river cover a portion of the Sorel Islands and will leave a layer alluvium. Although they can cause problems and damage to the island for a few weeks to travel, the spring floods are beneficial to agriculture.

The St. Lawrence River widens the entrance of Lake Saint Pierre which forms a delta archipelago of hundreds of islands and islets. Several channels crisscross between these islands. This region is characterized by a very few marked relief. The slope is 3 to 5 metres (9.8 to 16.4 feet) above sea level Most of the islands are widely flooded every spring.

This region plays a northern continental climate, slightly cooler than area Montreal but much more sunny. Frost-free period is long, which favors cereal crop production. In winter there is not too severe with rainfall and bit excessive cold. 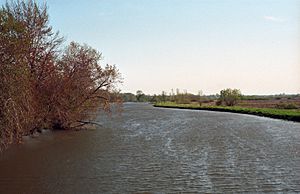 Islands and Lake Saint Pierre is the most important migratory stopover in eastern Canada for waterfowl. The ecological value of these wetlands has been recognized by the UNESCO in 2000.

These are the first Native Americans who inhabited and frequented the Archipelago are deriving their livelihood from the fauna of the islands. Jacques Cartier mentions in his travel in September 1535 · . On 29 June 1603, it was the turn of Samuel de Champlain to observe Amerindian. Then in August 1642, is the foundation of a wooden fort. This in order to repel the attacks of Iroquois on Trois-Rivières. The fort was burned by the Iroquois in 1647. It was not until 1665 that a new fort was rebuilt by the company of Captain Pierre de Saurel from Carignan. 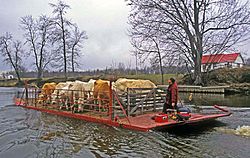 In La Visitation-de-l'Île-Dupas, Quebec in the summer, the islands are grazing in the open, no fences.

A few years later, in 1672, demobilized soldiers are the first settlers in the Archipelago. The exploitation of communal grazing on the islands finds its origin here. Agriculture fits this Archipelago of floodplains and in 1710 the population of the manor is 112 people. The population is concentrated in the Beaver Islands, Dupas, Saint-Ignace and Isle Madame at the north of the Archipelago.

In the late 1920s, several dams stones were built upstream channels to raise the water level in the shipping channel that runs south of the Archipelago.

Many summer cottages on pillories were erected along the "chenal aux corbeaux" (Ravens channel), between the Crows and Lapierre Islands. This is the corner of the country Le Survenant (roman) (French novel) described in the two novels written by Germaine Guèvremont The Outlander (written in 1945) and Marie-Didace (written in 1947). The characters in these two novels are associated with the Sorel Islands. Germaine Guèvremont lived for nearly 30 years on the Îlette Pé (near the "Chenal du moyne" - Channel of the monk) and her house became for some years the Museum of Scripture. 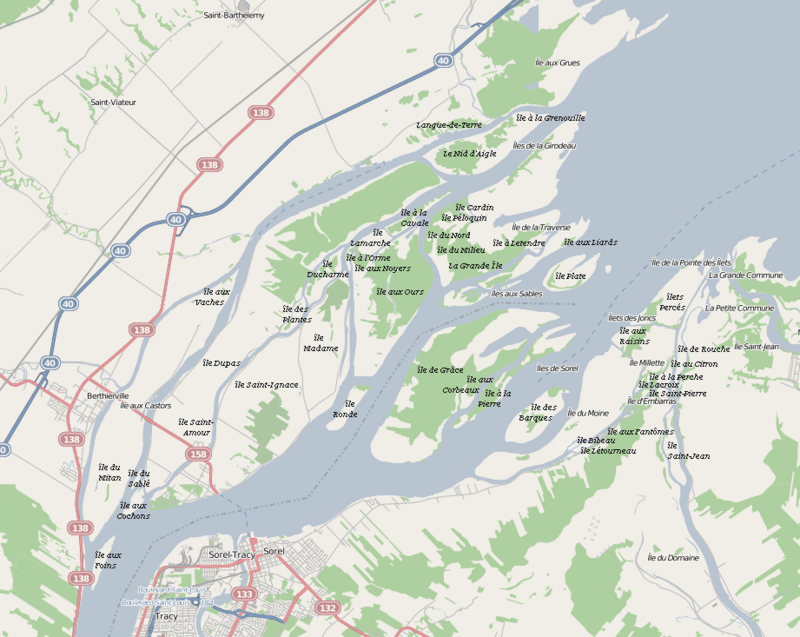 All content from Kiddle encyclopedia articles (including the article images and facts) can be freely used under Attribution-ShareAlike license, unless stated otherwise. Cite this article:
Archipelago of Saint-Pierre Lake Facts for Kids. Kiddle Encyclopedia.